So far, the HPAI outbreak has infected flocks in 35 states and affected nearly 38 million birds, making it the largest outbreak in the United States since 2015. It has contributed to higher consumer prices for eggs and chicken, amid several pressures already pushing up prices at the grocery store. In response to the ongoing outbreak, USDA recently announced it will put another $400 million toward its response.

Economist Lynn Hamilton, an agribusiness professor at Cal Poly San Luis Obispo, says the outbreak in 2015 coincided with a California law requiring larger cages than were then in widespread use. Similarly, this year’s outbreak arrived as California began implementation of its cage-free egg law. It’s given her a sense of déjà vu.

“We saw exactly the same thing seven years ago,” she said. “It was just this crazy convergence between policy and then this supply shock with the bird diseases.”

California is an egg importer, and prices there already were higher because the state can only bring in cage free-eggs, which largely come from states hardest hit in the outbreak such as Iowa and Wisconsin, Hamilton said.

“For quite a while now, California prices have been anywhere from 50 cents to $1 per dozen higher than the national average,” she said. That average has been on the rise, she said, though higher consumer prices don’t necessarily deter shoppers.

“We don't say, ‘Oh, well, it's too expensive,’” she said. “Most people are just going to buy eggs because, even when prices go up, it's still a relatively cheap source of protein.” At least in the short run, she said, most people can absorb the higher price. 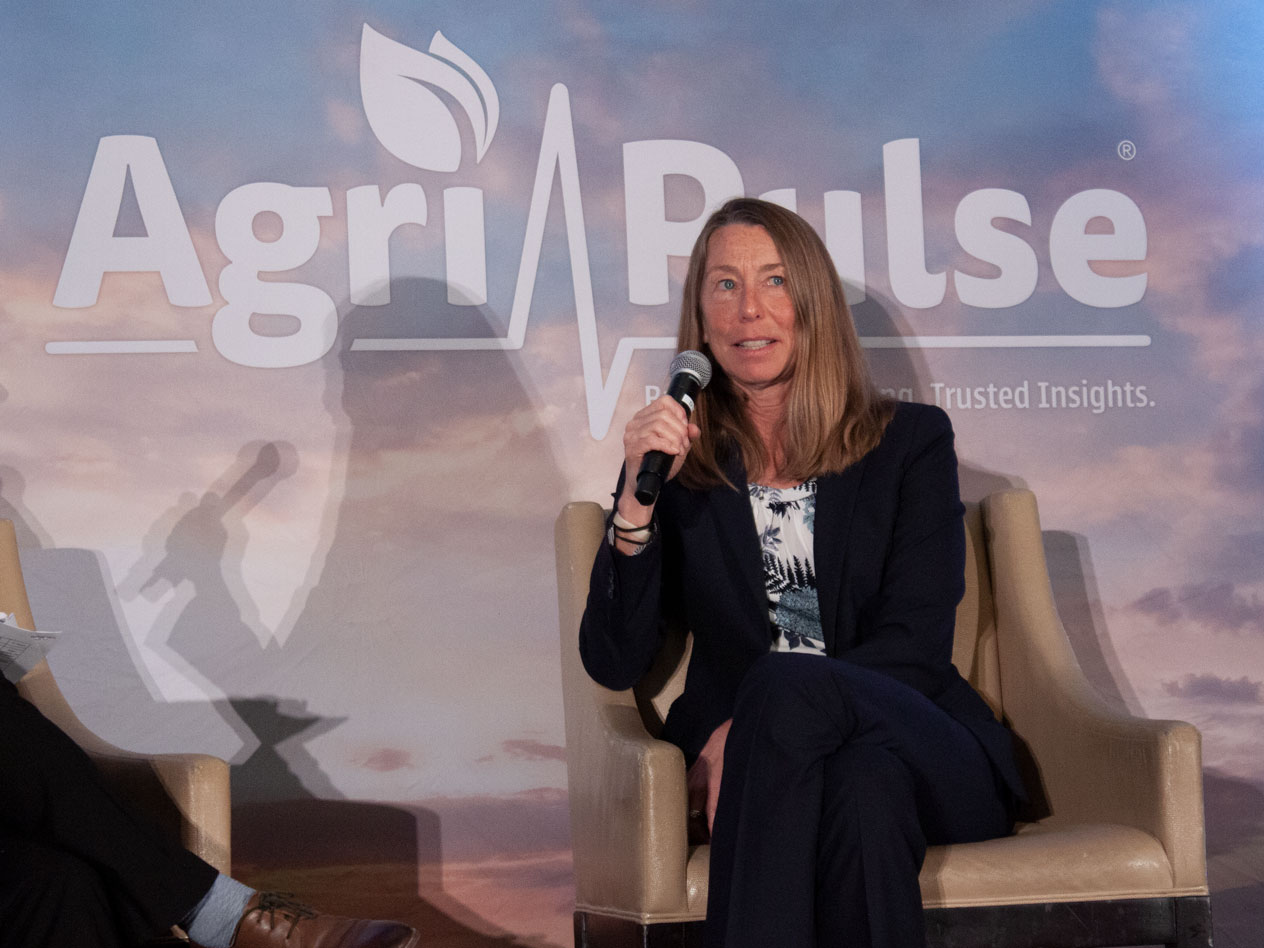 Lynn Hamilton, ag economist from Cal Poly San Luis Obispo, speaking at the 2021 Agri-Pulse Summit West. (photo: Amy Mayer)Plus, the supply has not been as constrained as it was seven years ago when the HPAI outbreak infected far more birds. Jada Thompson, an ag economist at the University of Arkansas, says credit goes to producers for increasing their biosecurity, which helped reduce spread. On the broiler side, Thompson said the outbreak has affected major producing states in the Mid-Atlantic (Delaware, Maryland and Pennsylvania) pretty intensely, but many southern states have so far remained uninfected. That’s prevented the outbreaks from causing a spike in consumer chicken prices.

“I'm not saying that they aren't having any impact,” Thompson said, “but it's not so substantial now that we're going to see these huge fluctuations.”

In its most recent consumer price index, USDA reported poultry is up 3% in April compared to March, and the annual forecast is for 8.5% to 9.5% increases. In contrast, USDA is projecting egg prices will be 19.5% to 20.5% higher this year, up from the 6% to 7% increase forecast just last month.

Thompson said in addition to there being less supply disruption from HPAI in broilers versus laying hens, the recovery time from an infection is faster for broilers.

“Broiler houses are quicker to cycle through, so even the broiler houses that were impacted are likely back online now, or could be back online,” she said. In contrast, recovery after laying hen barns are infected, depopulated, disinfected and then repopulated, across many sites, can directly correlate to price changes.

“And that's usually related to restocking and backfilling that supply,” Thompson said.

The current HPAI outbreak arrived during a season with many disruptive factors, making it a little harder to tease out the impact of the disease itself. Feed, Hamilton said, is significantly more expensive than it was before the Russian invasion of Ukraine.

“That might be as much of an issue, even without the influence of the avian influenza,” she said on consumer prices. “It's just that we're seeing a bigger, super-steep rise in a very short term that's caused by the influenza.” Growers have some tools to hedge feed costs but there’s no way to predict a disease outbreak, she said.

“The bigger flocks are using risk management strategies to try to lock in lower feed prices when they can,” she said, blunting the impact on consumers.

Recovery from the economic impacts of an outbreak, or being within the quarantine zone of an infected farm, can be complicated as there are few risk management tools for that type of loss, Thompson said.

Contractors who raise chickens but never own them would likely have clauses in their contracts to ensure they are still paid if their birds become infected. But Thompson said the gap that follows — when a producer is disinfecting the barn and then waiting for the next supply — may cause a hiccup in income as the producer relies on the integrator’s decision about how to rebuild the flock.

“That becomes that strategy game about where we're putting birds,” she said. Another ambiguity is what happens to producers who do not have infected birds but are within the quarantine zone and therefore cannot move their healthy birds. Thompson said the integrators will still be required to pay the producer for raising those chickens.

“We might only have a small number of farms that are actually infected, but more that are impacted,” she said. While in theory, those birds could enter the food supply since they were not infected, the quarantine that prohibits their movement makes that functionally impossible.

In laying hen barns, producers with healthy flocks can help mitigate the supply impact of a disease outbreak elsewhere by hatching more future laying hens and holding onto hens a bit longer than usual.

“Producers are making what adjustments they can to maintain the egg supply,” Hamilton said, which insulates consumers.