House Agriculture Chairman David Scott says that answer from Tim Schellpeper, the CEO of meatpacking giant JBS USA, at a hearing in April is enough to justify setting up a special investigator’s office at USDA to look into meat industry practices.

Those words were Schellpeper’s response when Scott asked the CEOs of the four largest meatpackers to state under oath whether they had agreed to fix prices. The other three CEOs all answered, “No.”

Schellpeper’s response wasn’t particularly notable at the time, and Scott made nothing of it at the hearing. His response to the CEOs was this: “Each of you have said no, and you all deny that you acted improperly or illegally,”

But Scott, D-Ga., raised the issue on the House floor Tuesday during debate on a package of seven bills, called the Lower Food and Fuels Act, that included the special investigator provision. Arguing against the legislation Thursday, the House Ag Committee’s top Republican, Pennsylvania Rep. Glenn Thompson, said all four CEOs had denied collusion. Scott responded by saying Thompson was mistaken:

“It wasn’t all four that said in answer to my question whether or not they agreed or had any agreement on pricing in our meat industry. Three said, ‘No.’ One said, ‘Not to my knowledge.’ Now, you must understand what we are dealing with here, and why just that reply from them requires an investigation.”

What’s next: The Democratic-controlled House passed the legislation, 221-204, with the support of seven Republicans. The Senate Ag Committee is expected to approve a version of the investigator measure next Wednesday along with a bill that would mandate minimum levels of cash trading in the cattle industry.

The fate of the rest of the House bill remains unclear. The top Republican on the Senate Ag Committee, John Boozman of Arkansas, tells Agri-Pulse the House measure is a “hodgepodge” that doesn’t address the impact of the global food crisis.

A senior Republican on the House Ag Committee, Arkansas Rep. Rick Crawford, says lawmakers need to rework commodity programs to reflect the recent increases in input costs. In an interview for Agri-Pulse Newsmakers, Crawford says reference prices in the Price Loss Coverage program were set at levels that reflected input costs a decade ago.

“I think you're going to have to bring that (program) into current levels, and then index” the prices, he said. PLC triggers payments when average market prices for the year fall below the reference prices. Raising the prices would increase the cost of the program.

Crawford didn’t say how lawmakers should pay for increasing those price guarantees, or whether money could be taken from other titles of the farm bill. 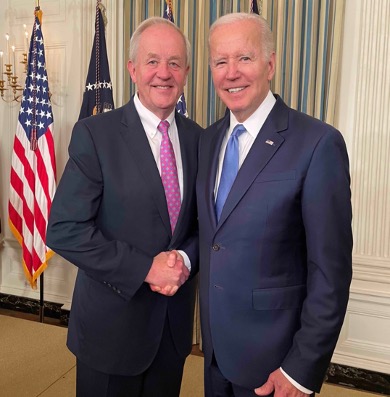 Michael Dykes, president and CEO of the International Dairy Foods Association with President Biden at the OSRA signing ceremony.

The ag sector will be pushing the Federal Maritime Commission to act quickly to write regulations stopping ocean carriers from refusing to haul containers full of U.S. fruit, vegetables, dairy, meat and rice to Asia.

The Ocean Shipping Reform Act that President Biden signed into law on Thursday gives the FMC the authority to stop carriers from unreasonably refusing to book export cargoes. But first, the FMC has to write a federal rule defining what is unreasonable.

“We look forward to quick action in coming weeks that brings greater transparency to fee charges and, in the coming year, redefines what it means for an ocean shipper to decline an agricultural shipment,” California Farm Bureau Federation President Jamie Johansson said Thursday after the signing.

Environmental and ag groups disagree over the validity of EPA’s finding that three neonicotinoid insecticides are “likely to adversely affect” two-thirds to three-quarters of threatened or endangered species.

Why it matters: As a result of the report, Federal wildlife agencies must develop biological opinions that will recommend mitigation measures.

The American Soybean Association, American Farm Bureau Federation and CropLife America say EPA’s biological evaluations don’t reflect the way the chemicals are actually used. ASA and AFBF say, for example, that the chemicals are used almost exclusively as seed treatments in soybeans, and then in “minuscule” amounts.

But George Kimbrell of the Center for Food Safety says EPA “admitted what we have long warned: Neonics are causing grave harm to not just bees but to the vast majority of all endangered species.”

Panelists on a roundtable looking at the thorny issue of “waters of the U.S.” pleaded with EPA and the Army Corps of Engineers on Thursday to provide a definition of WOTUS that can survive in the long term.

Preferably, that definition would continue to include all existing farming exemptions, most panelists said, not a surprising recommendation coming from a panel that was organized by the California Farm Bureau Federation. “We rely on these critical exclusions,” said CFBF’s Johannson.

How input will be used: EPA Senior Adviser Sylvia Quast said the agencies would use feedback from the discussions in future efforts to define WOTUS but cannot use any of it to inform the proposal it is now considering, which is supposed to provide a “foundational rule” for future regulations.

USDA will have some tough decisions to make as it tries to pick winners among over 1,000 applications for the $1 billion the department plans to spend on climate-smart demonstration projects.

She said it. “Increasing competition will ensure ranchers get their fair deal for their livestock while families get a good deal for meat and poultry.” - House Speaker Nancy Pelosi, D-Calif., arguing for passage of the Lower Food and Fuel Costs Act.