Home » Battle for Congress shaping up, with some key primaries to come
News Politics

Battle for Congress shaping up, with some key primaries to come

Battles for key farm-state seats in Congress are taking shape after primaries this spring, but there several intraparty battles still to be decided in coming weeks in states such as Missouri, Minnesota and Washington.

The eyes of the nation will be on Missouri’s Aug. 2 primary, where former Gov. Eric Greitens is in a tight race for the GOP nomination to replace retiring GOP Sen. Roy Blunt, a long-time member of the Senate Agriculture Appropriations Subcommittee.

Greitens resigned as governor in 2018 following allegations of sexual misconduct, but polls show him with a slight lead or tied with state Attorney General Eric Schmitt and House Ag Republican Vicky Hartzler, who was endorsed by the Missouri Farm Bureau. GOP Rep. Billy Long is running back in the pack.

Lawyer Lance Kunce, a former Marine, is vying with philanthropist Trudy Busch Valentine for the Democratic nomination. Polls indicate Kunce could run relatively close to Greitens, but he trails badly in hypothetical matchups with Schmitt or Hartzler.

In one of several other races that will decide control of the Senate, Colorado businessman Joe O’Dea won the GOP nomination June 28 to take on Senate Agriculture Committee member Michael Bennet in November. O’Dea, who supports abortion rights and says he would be a “Republican Joe Manchin,” defeated the more conservative Ron Hanks.

Democratic donors poured money into Hanks’ race, figuring he would be easier for Bennet to beat.

Miller, who was pitted against Davis as a result of seat redistricting, called her win “a victory for the America First movement” and said it “shows the strength and power of President Trump’s endorsement.” Trump campaigned in the district just ahead of the primary. 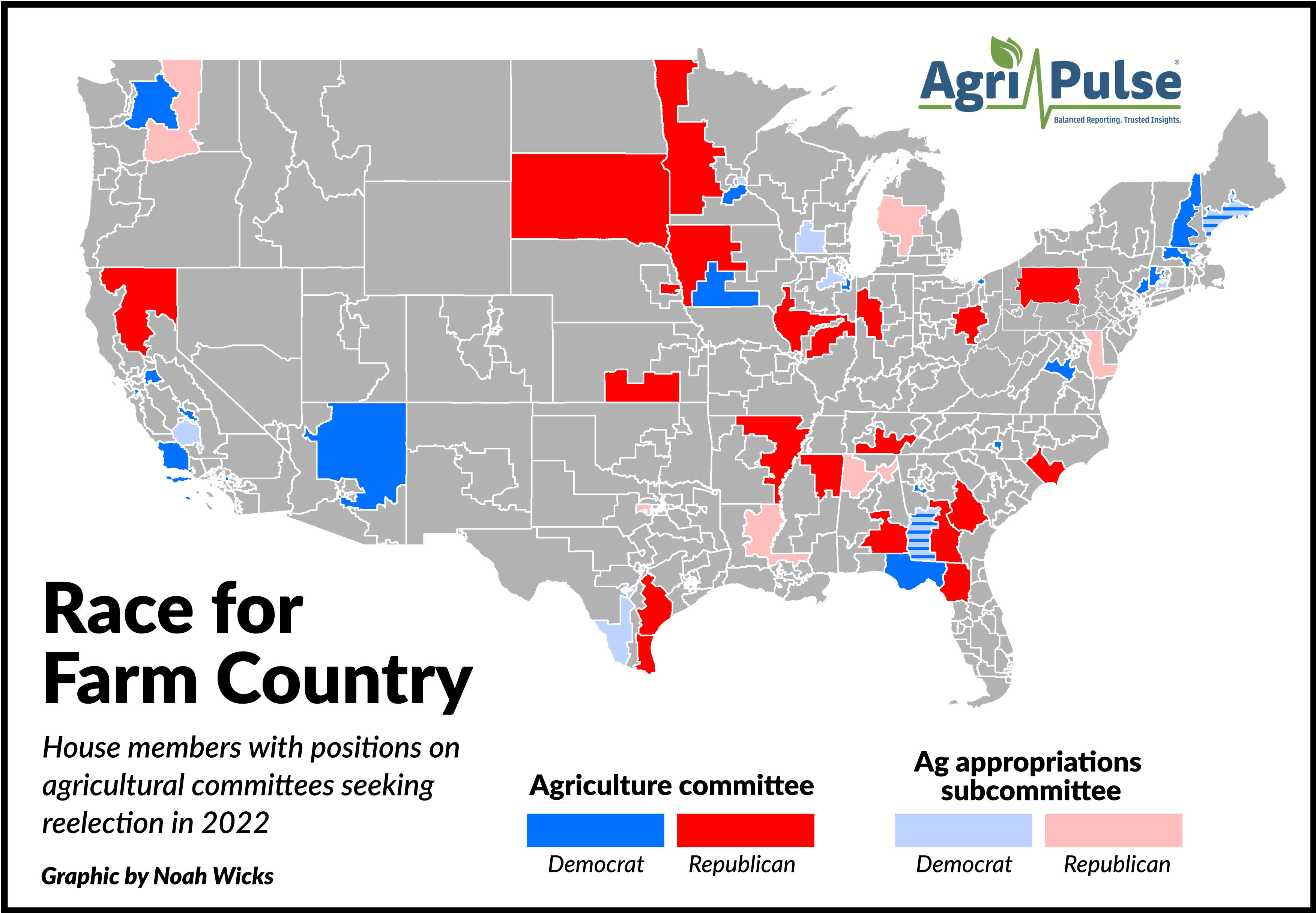 Davis, who was first elected in 2012, ranks seventh in seniority among Republicans on House Ag.

Another farm-state Democrat and former House Ag member, Oregon Rep. Kurt Schrader, a veterinarian who lost his primary to the more liberal Jamie McLeod-Skinner by 57% to 43%. Skinner has called for using the Clean Water Act to block large new animal feeding operations.

“There's a difference between small family farms — run by our neighbors and central to our food source and local economies — and industrial mega-factories,” she said in a Facebook post.

Arizona: House Ag Committee member Tom O’Halleran is currently running uncontested for the Democratic ticket for Arizona’s second district. But he will face a tough fight after the Aug. 2 primaries, as he faces off against one of the seven Republicans running in the newly redrawn Republican-leaning district, including state Rep. Walter Blackman and U.S. Navy veteran Eli Crane.

Connecticut: House Ag Democrat Jahana Hayes will face Marcus Furze in the Aug. 9 primary for the 5th District. The winner will face one of two Republican candidates — Michelle Botelho or George Logan — for the highly competitive seat in November’s general election.

The map, drawn by Republican Gov. Ron DeSantis and passed by a state legislature controlled by the same party, expanded four Republican-leaning districts to cover the area that formerly made up Lawson’s district. The state Supreme Court turned down the opportunity to weigh in on a challenge to the map on June 2, ruling 4-1 that it was premature for it to consider the case before lower courts did.

“The Florida Supreme Court’s refusal to act on Ron DeSantis’ unlawful and unconstitutional congressional map is disappointing and will disenfranchise thousands of Black voters across the State of Florida,” Lawson said in a press release.

Neither Dunn nor Lawson will face competition during the state’s Aug. 23 primary election, though the two are set to face off during the Nov. 8 general election.

Kansas: Sen. Jerry Moran, a Republican member of the Senate Agriculture Appropriations Subcommittee, is only facing one opponent in the state’s Aug. 2 Republican primary: Joan Farr, who recently lost in the Oklahoma primary against Sen. James Lankford; Farr ran campaigns in both states.

Minnesota: In an unusual twist, voters in Minnesota’s 1st District will elect a new congressman on Aug. 9 to replace GOP House Ag member Jim Hagedorn, who died earlier this year, and also select the party nominees to run in November for a new term.

Republican and former USDA official Brad Finstad is running against Democrat and former Hormel CEO Jeff Ettinger for the remainder of Hagedorn’s term, and they are also running for their respective parties’ nomination for the general election Nov. 8. The winner of the Aug. 9 special election will have less than five months left to serve the remainder of Hagedorn’s term, but will be the incumbent heading into the general election.

House Ag Committee members Michelle Fischbach, R-Minn., and Angie Craig, D-Minn., are running unopposed in the primaries. Fischbach should win re-election easily in November, but Craig’s 2nd District race Nov. 8 should be highly competitive. Craig faces a rematch with former Marine Tyler Kistner, whom she beat by 2.2 percentage points in 2020.

Rep. Betty McCollum, a progressive from Minnesota’s Democratic-leaning 4th District who currently sits on the House Agriculture Appropriations Subcommittee, is facing a significant primary challenger from the left. Amane Badhasso, an Ethiopian refugee who works as a community organizer, has raised over $600,000 in a bid to unseat McCollum.

While Maloney no longer has to worry about Jones, he will have to fight off progressive state Sen. Alessandra Biaggi for the Democratic nomination on Aug. 23.

To the south, in New York’s 6th District, Agriculture Appropriations Subcommittee member Grace Meng, D-N.Y., is unopposed for the Democratic nomination. She will face Republican Jesus Gonzalez in the general election this fall, but she has good odds in the Democratic-leaning district.

The state of Washington uses a “top-two” primary system, also known as a jungle primary, which allows voters to select their top two candidate preferences, regardless of party. This system allows for candidates of the same party to face each other in general elections, so long as they are the top two candidates.

Dan Newhouse, a Republican member of the House Agriculture Appropriations Subcommittee, faces a similarly large slate of opponents in Washington’s 4th District. The Yakima Valley farmer is being challenged by six other Republicans, including Trump-backed former police chief Loren Culp.

Republican party leaders in Washington have previously expressed disappointment over Newhouse’s decision to vote to impeach Trump, with party chairmen in six of the eight counties in Newhouse’s district even calling for him to resign last year. He will also face one Democrat, farmer and restaurant owner Doug White.

Sen. Patrick Leahy, D-Vt., the current chair of the Senate Appropriations committee and a member of the Senate ag committee, is planning to retire after his ninth term. Rep. Peter Welch and two other candidates are vying for the Democratic party’s nomination to replace Leahy, while three Republican candidates hope to land on the Republican ticket.

This story's map has been updated to reflect the correct location of Nebraska's 2nd Congressional District.