The latest inflation numbers are casting new doubts on Democratic efforts to salvage President Biden’s climate agenda. The Consumer Price Index for June was up another 1.3%, helped by a 1% increase in supermarket prices.

Biden said the June numbers were “out-of-date,” citing recent declines in prices for gasoline as well as wheat and other commodities. But Sen. Joe Manchin, a West Virginia Democrat who is critical to passing portions of Biden’s Build Back Better plan, including climate-related provisions, quickly issued a statement Wednesday making clear that inflation remains a major concern for him.

“No matter what spending aspirations some in Congress may have, it is clear to anyone who visits a grocery store or a gas station that we cannot add any more fuel to this inflation fire,” Manchin said.

Why it matters: Democrats are trying to use the budget reconciliation process to move portions of the Biden plan through the 50-50 Senate. The plan’s climate provisions include substantial new funding for farm bill conservation programs.

What’s ahead: The price of wheat and other grains represent a fairly small share of the retail cost of processed foods. 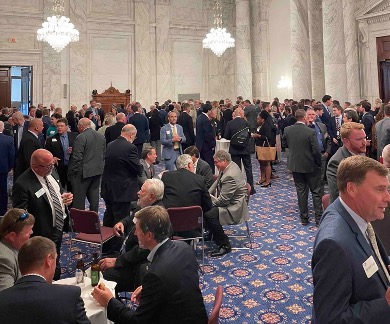 The Senate Agriculture Committee will be shifting its focus from the farm bill ahead of the August recess to considering nominations for USDA.

The committee’s ranking Republican,, John Boozman of Arkansas, tells Agri-Pulse he expects the committee to hold more hearings on the farm bill this year. But for now, the committee will be focusing on those nominees, including Oregon Ag Director Alexis Taylor, President Biden’s pick to be USDA’s undersecretary for trade.

Keep in mind: Congress will have relatively few days in session after July ahead of the November elections.

Doug McKalip, who is Biden’s nominee to be the next chief agricultural negotiator for the office of the U.S. Trade Representative, is getting pressure from Republicans to advocate for a change of course at the agency.

The Biden administration continues to resist calls from Congress and farm groups to negotiate new trade agreements, but Boozman and 20 other GOP senators are urging McKalip to advocate for change.

In a letter to McKalip, the senators asked him to “become an advocate within the Office of the United States Trade Representative for the prioritization and inclusion of market access commitments as part of U.S. trade discussions. Our farmers and ranchers are facing uncertain times due to the immense pressure of an exponential increase in input costs. Greater access to international markets for products we export would help alleviate some of that pressure.”

GOP senators and House members are uniting to demand relief from import duties on fertilizer imports as farmers suffer under extraordinary prices. Sen. Roger Marshall, R-Kans., and Rep. Tracey Mann, R-Kans., together with 30 other lawmakers, are sending a letter today to Biden, demanding that he remove duties on phosphate fertilizer from Morocco and halt the process of levying duties on urea ammonium nitrate fertilizer from Trinidad and Tobago.

“The bottom line is that fertilizer is critical to national security and national defense,” the lawmakers write. “Its affordability is also critical to wrangling out-of-control inflation. As such, we strongly encourage you to take immediate action to waive duties on fertilizer imports from Morocco and Trinidad and Tobago.”

The four Upper Colorado Basin states will be submitting a plan next week for cutting back on their water use. But Utah’s Colorado River Commissioner, Gene Shawcroft, tells Agri-Pulse that most of the water cuts needed to deal with a long-running drought will have to come in the lower basin states, which use more water.

Bureau of Reclamation Commissioner Camille Touton told lawmakers last month that all seven basin states had 60 days to determine how to use 2 to 4 million acre-feet less water - or Reclamation would make the decision for them.

Interior Secretary Deb Haaland is assuring Missouri Sen. Roy Blunt that if a wildlife conservation bill he co-sponsored becomes law, her department will work closely with states to help recover imperiled species, not step up enforcement of landowners.

“Do you view this bill as a method of increasing fish and wildlife enforcement activity or more as an opportunity to collaborate with the states to prevent species from being listed?” Sen. Roy Blunt, R-Mo., asked Haaland at a Senate Appropriations subcommittee Wednesday.

“I would take it as the opportunity to assist the states,” Haaland said of the Recovering America’s Wildlife Act, which passed the House in June. The bill, which would authorize $1.4 billion in spending, is awaiting floor action in the Senate.

She said it. “Reconciliation will be whatever we can get 50 votes for, and there's no mistaking that.” - Sen. Elizabeth Warren, D-Mass., asked her response to a Senate reconciliation bill possibly being limited to Medicare drug provisions and Afford Care Act subsidies, should Sen. Joe Manchin, D-W.Va., oppose including anything else.

Manchin told reporters that a bill limited to those issues would be a “big deal.”