Industry leaders weigh in on the future of California agriculture

As a series of crises tests the resilience of agriculture, longstanding labor and water issues have intensified beyond precedent. To survive, the industry is recruiting unlikely allies and embracing new technologies.

During the Agri-Pulse Food & Ag Issues Summit in Sacramento last week, industry leaders from across agriculture spelled out a dire situation for food production but also shared their insider perspectives on opportunities ahead for broader coalition building.

Labor and water policies have long been center stage for California farm groups. To Dave Puglia, president and CEO of the Western Growers Association, those issues are challenging the industry more than ever—as farmers scramble to manage port congestion, supply chain shortages, skyrocketing inflation prices on inputs and the loss of crop protection tools.

“What I really am concerned about is how our industry is going to stay profitable,” added Richard Waycott, president and CEO of the Almond Board of California, who worried that freight rates and costs for petroleum-based products may never return to pre-pandemic levels, while almond prices are not rising with inflation to cover production expenses “that are through the roof.”

One fifth-generation almond farmer told Waycott that agriculture has reached a breaking point.

Adding to these challenges, consumers and retailers want more sustainability in agriculture, while alarming rates of climate change, hunger and nutrition insecurity indicate California should be intensifying production, according to California Farm Bureau President Jamie Johansson.

“But what we're seeing in California—what we're being asked to do as farmers—is really manage scarcity,” said Johansson, referring to a range of resource cutbacks in the state, especially on surface water deliveries and groundwater pumping. 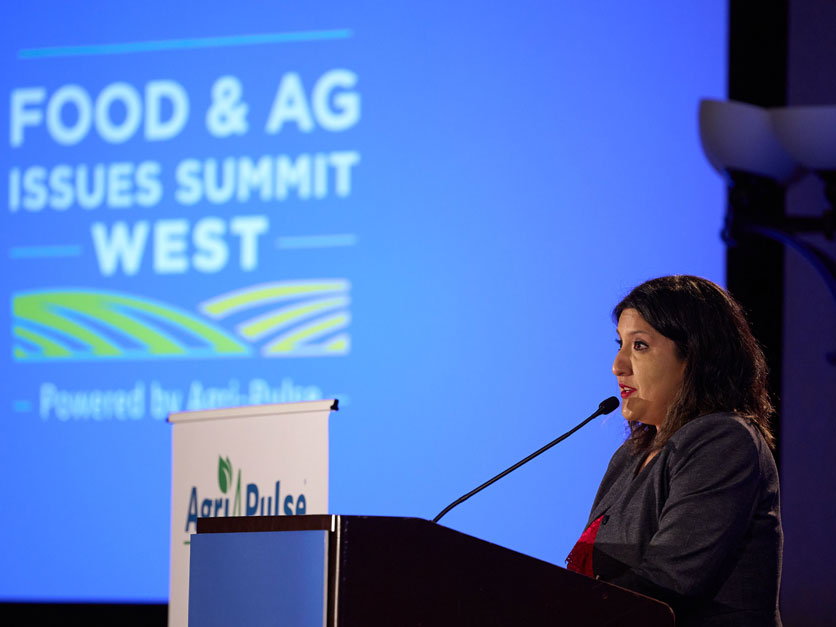 “Well now we're dealing with frost and floods and heat events in a span of two months,” said Kruse.

With water scarcity, California Fresh Fruit Association President Ian LeMay pointed to an earlier conversation at the summit with Senator Melissa Hurtado of Sanger, who warned of an emerging human security crisis, particularly among farmworker communities in her San Joaquin Valley district.

Intensifying that crisis is the implementation of the Sustainable Groundwater Management Act (SGMA), which will lead to the loss of as many as a million acres of irrigated agriculture—about 10% of the state’s total share, according to a UC Berkeley study. The state fallowed an additional 400,000 acres last year due to the drought and will more than double that amount this year.

In 2014 Puglia took part in the negotiations that led to the passing of SGMA, describing the legislation as a carefully constructed compromise.

As one lawmaker among a growing list of those frustrated with Sacramento’s inertia with infrastructure investments, Hurtado has pushed for several years to allocate more state dollars into long-term drought planning in the valley.

“In the middle of this historic drought, we have yet to enact holistic policies that will help preserve our water, our environment, our food supply and our overall resiliency,” said Hurtado, in a speech that resonated with the industry leaders.

Similarly, Johansson compared the state budget to that of the European Union, which he described as based on protectionism and financial bailouts rather than on science and technology investments. He viewed California as failing to be proactive and worried the state may lose out on funding from a federal transportation bill.

“We are watching our science and our markets being taken away from us that we depend on to make the changes necessary to continue to be resilient,” he said, stressing that not all farmers will stay in business as industry consolidation escalates and some production shifts to other states.

Earlier in the summit, California Natural Resources Secretary Wade Crowfoot sympathized with the grievances often shared by the agriculture community and throughout the Central Valley over the long process for approving $2.7 billion for water storage projects that voters greenlit with Proposition 1 in 2014.

Lawmakers explore the state of the wine industry in California
What defines a small farm in California? It's complicated—but critical to agriculture’s future

He has been personally involved with helping agencies and project proponents to streamline the permitting processes, which could lead to more groundwater recharge projects launching ahead of the winter rains this year and for surface water projects to bolster long-term resilience ahead of future droughts.

Other strands of optimism sprung from a summit discussion on automation, mechanization and other promising innovations that could reduce labor costs and bring new efficiencies to production practices.

LeMay applauded the panel session but cautioned that while some emerging technologies will help growers, they will still need an available labor force at least “until that magic bullet is found to pick a peach or a plum off of a tree and place it into a basket.” He called it a fallacy to believe that robots will eventually replace all workers. An autonomous cart, for example, would make strenuous tasks easier for the picker and his job more efficient—incremental improvements that create a better overall environment, he said.

Johansson, however, tempered expectations for major reform, saying it would be too political with upcoming congressional and presidential elections. Instead, the immediate need is to improve the H-2A guestworker visa program and expand it to South Africa, South America and Eastern Europe.

With the adoption of technologies like driverless tractors and drone aircraft outfitted with precision pesticide sprayers, Johansson decried regulatory roadblocks at the state level that stand in the way, contending that “agriculture is going to have to fight for that.” 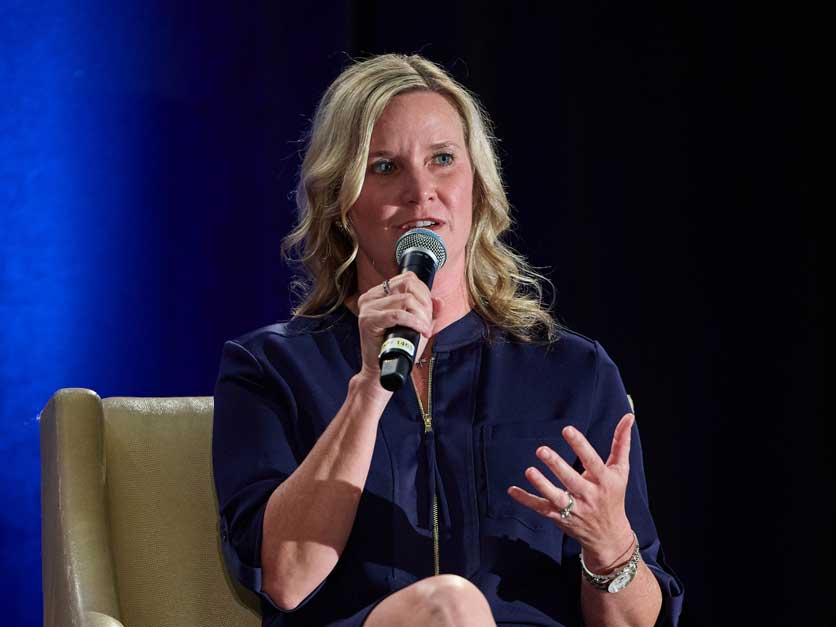 Waycott, on the other hand, was inspired by a panel discussion that detailed the need for state incentives to support the conversion of agricultural waste, forest debris and other biomass products to renewable bioenergy. The Almond Board has been searching for opportunities like this to derive more value from almond biproducts, which account for 70% of the material each orchard produces outside of the kernel.

Despite the dismal conditions growers face, the industry leaders found hope in a more collaborative mindset that has begun to emerge in California. Johansson pointed out that each of the five groups represented share members and often collaborate with each other as well as business associations to expand the voice of California agriculture—whether in Washington, D.C., the Legislature or the San Joaquin Valley.

“We can be a viable voice when it comes to the problems facing California as a whole,” said Johansson.

Puglia pushed back on a comment made during the innovation panel that advocates in agriculture seem to seek out policy wins more than partnerships.

“I don't know any of us in the production ag industry in this state who are looking for a fight,” he said. “We're looking for collaboration all the time.”

Puglia recognized that lawmakers, regulators and interest groups often corner agriculture in a defensive position. While the industry may wish to kill problematic legislation, farm groups are often “forced to be collaborators,” since tweaking a bill to make it workable is a more promising approach to reducing threats to growers. Like Hurtado, Puglia hoped for a greater level of regional engagement.

Such uncommon collaborations emerged early in the pandemic, recalled LeMay. The industry partnered with communities and state agencies to procure PPE for thousands of agricultural workers and later mobile testing units and on-site vaccination clinics.

“I don't know where we would have been and how we would have triaged the pandemic without the California Farmworker Foundation,” said LeMay, who described how the nonprofit organization launched in 2016 helped to “degrade and an old criticism of agriculture that the employer and the employee community were adversaries.”

Puglia praised a summit discussion on partnerships to train workers for next-generation jobs, which included CDFA Secretary Karen Ross and focused on a new workforce development initiative in the valley. In Sonoma County, meanwhile, Kruse has sparked another unique collaboration, which began with a phone call to the Ford Motor Company and evolved into a surprising partnership on electric trucks and a smart system to improve the efficiency of gas-powered trucks already on farms.

“I've never seen the level of trust and collaboration amongst all of us in my career than we have today,” said Puglia, adding that such partnerships can defeat intractable challenges around water and labor. “I am optimistic about where we're headed.”