States still at odds over measures to deal with drought-starved Colo. River

Bureau of Reclamation Commissioner Camille Touton tasked seven states that use water from the Colorado River with determining how to cut between 2 and 4 million acre-feet of water in June, warning them that the Bureau of Reclamation would step in and “act unilaterally” to protect the system if they didn't.

But these states emerged from 3 months of negotiations this week with no agreement and are now waiting for direction from the Bureau of Reclamation, which has not offered any details on when and how it would exert its authority to make the cuts.

The agency did declare a Tier 2a shortage for the 2023 water year on Tuesday, increasing existing curtailments for the three lower basin states and Mexico.

But Touton requested all seven states make additional cuts in 2023 to preserve operations on Lake Powell and Lake Mead. She and state water officials admitted Tuesday that no consensus had been reached.

Early on in the negotiating process, the four states in the upper Colorado River Basin — Colorado, New Mexico, Utah and Wyoming — announced a five-point plan to conserve water, but did not propose any cuts to their allocation. These states, which used a collective 3.5 million acre-feet of water in 2021, said the reductions needed to come from Arizona, California and Nevada, which used 7.5 million acre-feet.

"The lower division states have got to figure out how they're going to use less water to balance the system,” Gene Shawcroft, Utah’s water commissioner, told Agri-Pulse in July. "We believe that there are things we can do in the upper division to help, but we can't solve the problem without their participation in some significant cuts.” 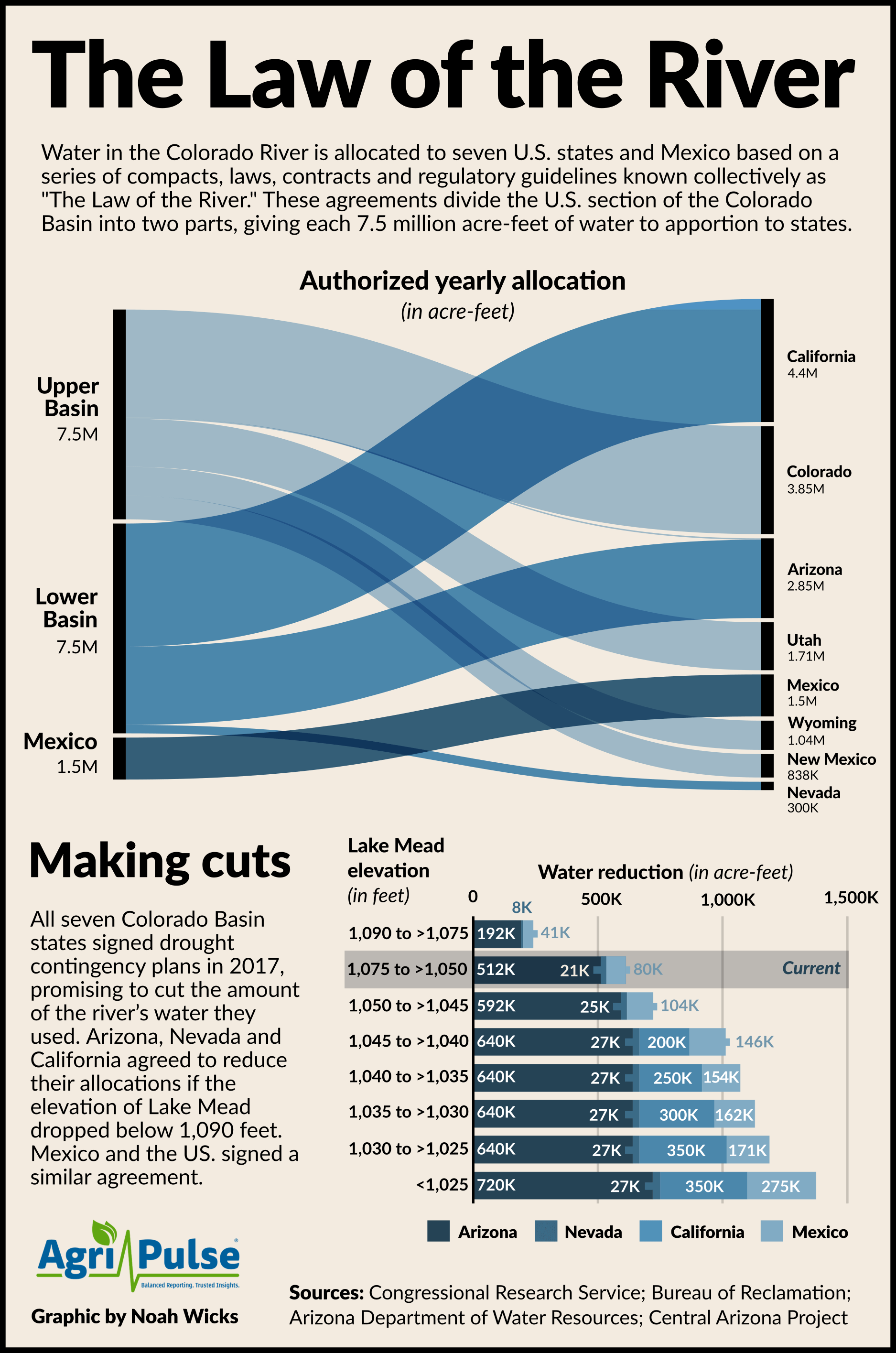 Arizona and Nevada put forward a proposal for 2 million acre-feet of reductions between the lower basin states and Mexico. But, according to Arizona Department of Water Resources Director Tom Buschatzke, it was rejected by California and the Bureau of Reclamation.

Ted Cook, the manager for the Central Arizona Project, said California and Arizona negotiators did not agree on proposed water curtailments. He and Buschatzke also said California was more focused on creating voluntary water reduction programs, while Arizona wanted to see mandatory ones.

“I absolutely believe they are negotiating in good faith,” Buschatzke said. "They have put resources on the table. We don't think they were enough.”

Peter Nelson, the chairman of the Colorado River Board of California, expressed his disappointment with the lack of an agreement in a statement Tuesday and called for negotiations to continue despite the deadline passing.

“California believes that in the remaining months of 2022, all parties across the Basin must remain engaged with the goal of reaching agreement on substantial water use reductions,” he said. “Given the monumental challenges before us, inactivity is not an option.”

Nevada’s primary Colorado River negotiator, John Entsminger, said in a letter to Interior Department officials on Monday that conversations had produced “exactly nothing in terms of meaningful collective action to help forstall the looming crisis.”

In the letter, Entsminger called for the department to use its authority to preserve water levels in the river. But on Tuesday, Touton and other Interior officials did not offer any details on precisely when and how the agency would exert its authority to make the cuts. Instead, they said the department was still focused on brokering an agreement between the states. 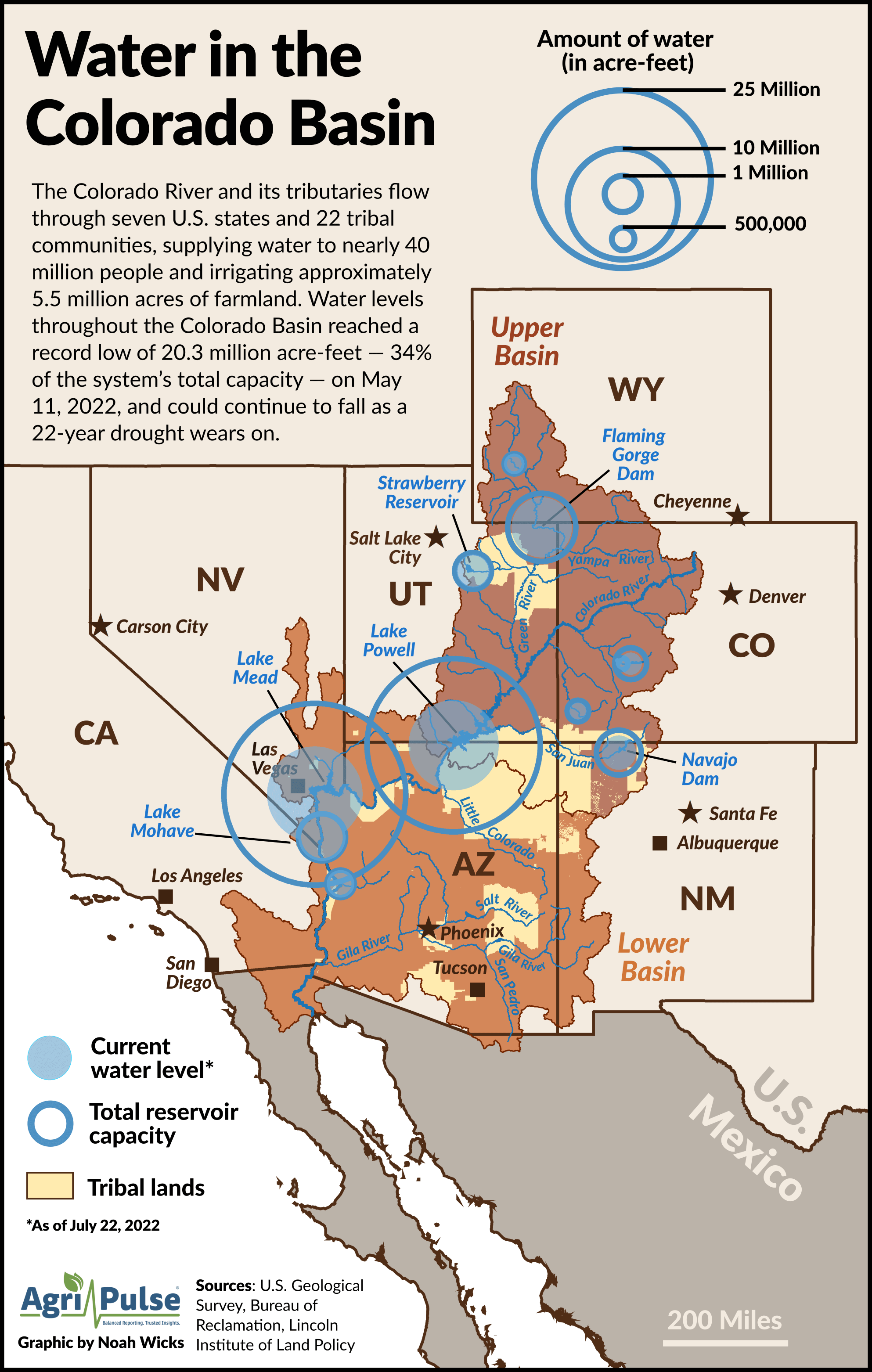 “The Interior Department will continue working with the basin states to develop a consensus solution,” said Tommy Bodreau, the agency's deputy secretary. "There is still time for that.”

Touton did say the Bureau of Reclamation would explore the feasibility of altering Glen Canyon Dam to operate under lower water levels and also consider releasing more water from the upper basin’s reservoirs to prop up Lake Powell. She said the department also will look into “administrative initiatives” that would maximize urban and agricultural water efficiency in the region. She would not provide additional details or give a timeline for any of these actions.

The Bureau of Reclamation will be soon receiving $4 million in drought-related funding to aid with its water conservation efforts, however. The money was included in a climate funding package that President Joe Biden signed into law on Tuesday.

Among other things, the funding could be used to compensate water users for water cuts or to pay for projects that reduce water use. The agency is “required to prioritize the Colorado River Basin and other basins experiencing comparable levels of long-term drought."

Buschatzke and Cook said they’d like to see more details on the Bureau of Reclamation’s plans.

“We would encourage and do encourage the United States to move forward as expeditiously as they can to get to that point where they can define what they will do and when they will be able to do it,” Cook said. “The sooner, the better.”