US ag eager for more USDA funding to promote exports

Lawmakers are signaling they may be ready to boost funding for ag promotion overseas, and farm groups are hungry for the dollars that they say increase the appetite overseas for U.S.-grown food.

The ag sector is strongly supporting bipartisan efforts to increase funding for two USDA programs that put money in the hands of farm groups to promote everything from pork to prunes, in countries ranging from Italy to Japan.

Senators last month introduced a bill to double the annual funding for the Market Access Program to $400 million and the Foreign Market Development Program to $69 million. A companion bill is expected to be introduced in the House of Representatives.

The legislation is intended to be considered as part of the next farm bill, where MAP and FMD are authorized under the trade title.

“We want to very clearly showcase the need (and) support and make sure the (leaders of the) Agriculture Committees know that this is a very high priority,” said Tyson Redpath, a principal at The Russell Group.

And ag leaders like National Association of State Departments of Agriculture CEO Ted McKinney say an increase in funding for the programs would be very welcome.

“We are being outspent in this category,” said McKinney, who was also USDA’s undersecretary for trade and foreign agricultural affairs during the Trump administration. “There’s a lot of turmoil around the world, which means it’s an opportunity to demonstrate the value and reliability of U.S. ag products. We at NASDA would be very supportive of the MAP doubling … because it is so well used and well stewarded by (the Foreign Agricultural Service).” 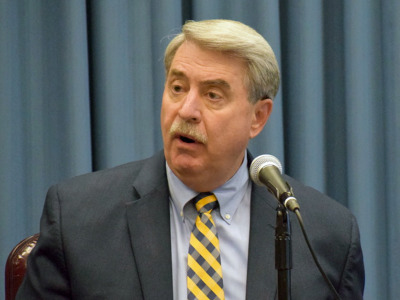 Take, for example, a MAP-funded social media campaign to introduce South Korean consumers to American processed pork products. USMEF produced several films and published them online to promote “ready-to-heat” or “ready-to eat” products that don’t yet have the kind of acceptance in Korea as they do in the U.S.

“The U.S. pork brands that are promoted in the showcase are still somewhat unfamiliar to the Korean foodservice sector, and some of the U.S. processed items were imported for the first time for the recording of this video series,” said Jihae Yang, USMEF’s director in South Korea.

Those types of projects are extremely beneficial, says USMEF spokesman Joe Schuele, but he stresses that some of the biggest successes have been the group’s training sessions, where they bring in foreign importers and distributors to educate them on the attributes, uses and value of American red meat.

“That’s been a highly successful program for us, because we’re able to reach out to a key audience – importers and distributors – and they go on to educate their customers about how U.S. beef, pork and lamb can help grow their businesses,” Schuele said. “These educational campaigns are a good example of something that we’re able to do with MAP dollars that pays long-term dividends because you’re cultivating a customer base that becomes very loyal to U.S. meat."

The U.S. Wheat Associates is another big MAP and FMD user. Education for foreign millers, bakers and food manufacturers represents a large chunk of what the group does with those funds.

When the group found cookie and cake makers from Thailand and the Philippines who wanted to expand their businesses and improve the quality of their products, U.S. Wheat used funding from the FMD program to bring them to the Pacific Northwest and show them how U.S. wheat could meet their needs.

“These export promotion programs are essential to building relationships with bakers and flour millers around the world,” said Darren Padget, a former U.S. Wheat chairman and wheat farmer in Grass Valley, Oregon. “The demand for wheat sets new records every year, and we have to compete for that business.”

The cookie and cake makers visited Padget’s farm, but they also spent a lot of time at the Wheat Marketing Center in Portland, Oregon, that is home to innovation, analytical and baking laboratories and specializes in matching classes and subclasses of wheat to producers’ needs.

“If you can make it from wheat or wheat flour, we can help you improve it,” says Mike Moran, the center's executive director.

Just last week, the center, together with U.S. Wheat, hosted millers and bakers from Vietnam, the Philippines and Thailand who were interested in making noodles, crackers, bread and buns from U.S. wheat, Moran said.

McKinney says MAP and FMD help give U.S. ag products an edge in markets where they are often at a disadvantage, and Donn Zea, executive director of the California Prune Board, agreed.

Some of the most lucrative foreign markets for American prunes are also some of the hardest won because U.S. prunes often face tariffs that don’t apply to competitors in countries like France and Chile. MAP funding is often key to the ability of his producers to compete.

“Overall, MAP has been a critical part of the prune industry still being successful in California,” he said. “Where we use MAP is in markets that we believe we’ve got an opportunity to either gain market share or defend market share.”

Italy is a prime example of the former, he said. From April through June of last year, the California Prune Board worked with the Italia 1 Channel to feature U.S. prunes in eight episodes of its cooking show “Cotto e Mangiato,” which translates as "Cooked and Eaten."

U.S. prunes face a 9.6% tariff in the European Union and an 8% tariff in the UK, but Zea stressed that hasn’t stopped U.S. export growth, and MAP funding is part of the reason.

When asked whether Congress should increase MAP and FMD funding, Zea replied: “It’s high time. We would compete vigorously for more money.”

Some of the funding for the California Prune Board’s campaign in Italy also came from the Agricultural Trade Promotion program, a temporary, $300 million, MAP-like program the Trump administration included in its 2019 efforts to help the ag sector weather the trade war with China.

Groups that got ATP funds have until the end of fiscal year 2024 to use them, but the program is essentially closed, and USMEF’s Schuele said an increase to MAP and FMD would allow exporters to continue promotions at the elevated rate that ATP allowed.

“To see (MAP and FMD) doubled permanently and not rely on a temporary thing, coupled with the success that has been demonstrated by ATP, we hope that Congress will take a very serious look at it because the value has been proven time and time again,” said McKinney.