An Agriculture Department program that is set to play a big role in the Biden administration's efforts to deploy renewable energy and increase energy efficiency on farms and in rural areas has been steering the bulk of its funding into solar projects, but a historic infusion of new funding from the Inflation Reduction Act is expected to somewhat diversify the technologies used in the program.

More than 75% of the annual grant and guaranteed loan funding provided by the Rural Energy for America program in recent years has gone toward solar projects.

The $2 billion boost from the IRA, the bill the Democratic-controlled Congress passed in August to carry out President Joe Biden's climate policy, is the biggest pot of new funding for REAP since it was created by the 2008 farm bill. The program has provided a total of $608 million in grants and guaranteed about $2.8 billion in loans since fiscal 2008, according to USDA data.

“REAP is an extremely popular program, and it’s usually oversubscribed,” said Karama Neal, administrator of USDA's Rural Business-Cooperative Service (RBCS). “So we are excited about the amount of funding that’s available because it’ll help us meet those needs.”

Neal told Agri-Pulse the department is still determining how to disburse the IRA funding, noting that the agency has been reviewing data from past funding rounds and plans to conduct listening sessions to figure out how to deliver it “as efficiently and as effectively as possible.”

REAP assistance is available to rural small businesses and agricultural producers who get at least half their gross income from their operations. The program provides guaranteed loans of up to 75% of the cost of eligible projects, grants covering up to 25% of project costs, and combined grant and loan guarantee funding for up to 75% of project costs.

More than 900 of about 1,200 grants awarded in fiscal 2022, which ended Sept. 30, went toward solar projects, accounting for $31 million of the total grant funding of $43 million. The agency also guaranteed 50 loans totaling $296 million for solar projects, out of a total of $376 million.

Solar emerged as the dominant recipient of REAP funds in fiscal 2015. In 2013, solar projects accounted for just one-third of total grants and loans, but by 2015, solar projects claimed 55% of the $71 million in grants and 91% of the total guaranteed loans.

“I think solar has emerged and matured as a technology and it reduces energy costs for business owners, rural families,” a USDA spokesperson told Agri-Pulse. “And it’s something that is easier to do if you’ve got the space to do it, right? So I think that is probably why this program tends to be more of an appeal.” 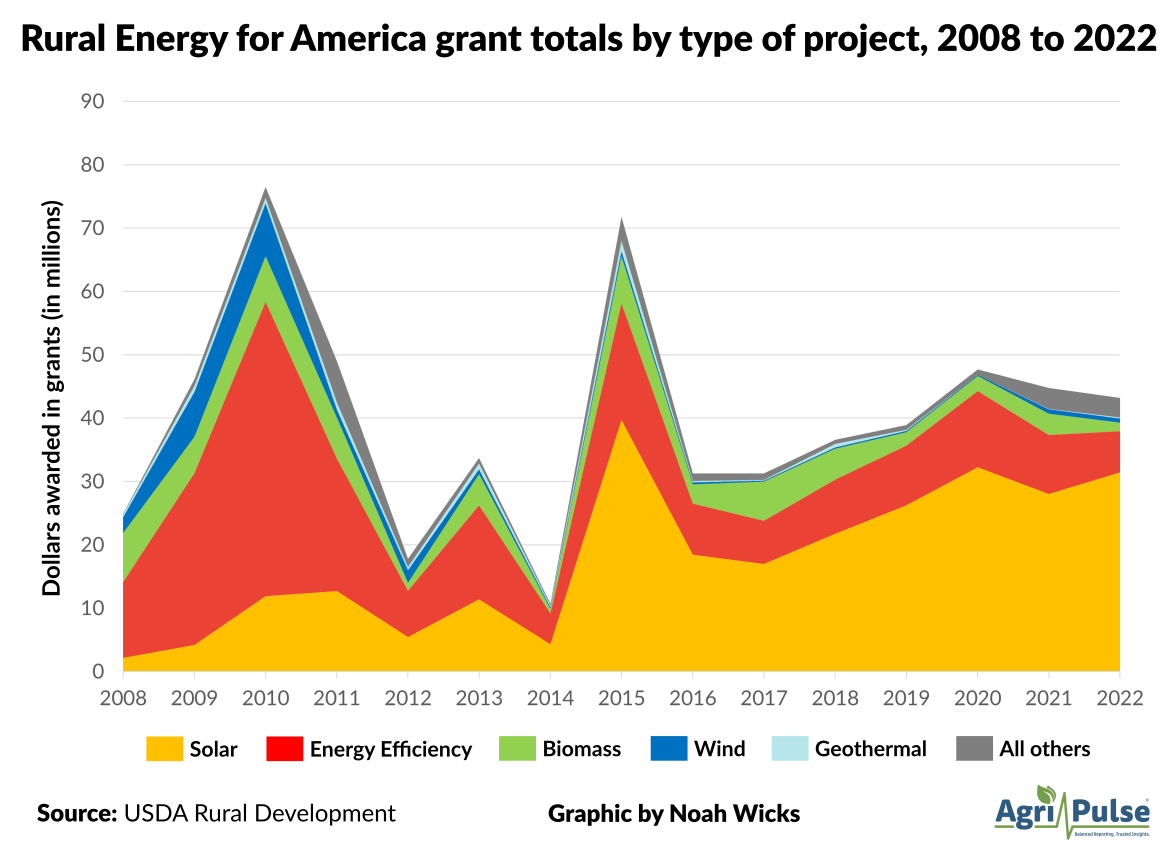 “Whether or not they’re choosing to get a loan or a grant depends on the size of the project or depends on what other funding sources they already have in place,” the USDA spokesperson said. “That’s between them and their lender.”

Biogas and biomass systems, which can involve anaerobic digesters that capture methane from manure, accounted for about $1.8 million in grants and $55 million in guaranteed loans in FY22.

Wind projects, while having some level of funding since 2008, typically receive a smaller percentage than solar and energy efficiency projects. Seventeen wind projects received a total of $674,652 in grants in FY22 and no loans.

Lloyd Ritter, the director of the Agriculture Energy Coalition and a former Senate aide who was one of the minds behind the creation of the REAP program, told Agri-Pulse that biogas and distributed wind power systems are often more expensive or cumbersome to get approved, which is likely why fewer of these types of projects have received REAP assistance.

The push to get some funding set aside for underutilized technologies, Ritter said, was fueled by a desire from the Ag Energy Coalition and the American Farm Bureau Federation to ensure that the program’s funding was going to a number of different project types.

“Solar is a great technology — a lot of farmers want to deploy it on their barns or for things like solar irrigation,” Ritter said. “And energy efficiency is very good. But we need to make sure we're funding a diverse array of technologies. That was the original intent of the REAP program from day one and now with this underutilized technology reserve for renewables, we think we can achieve that.” 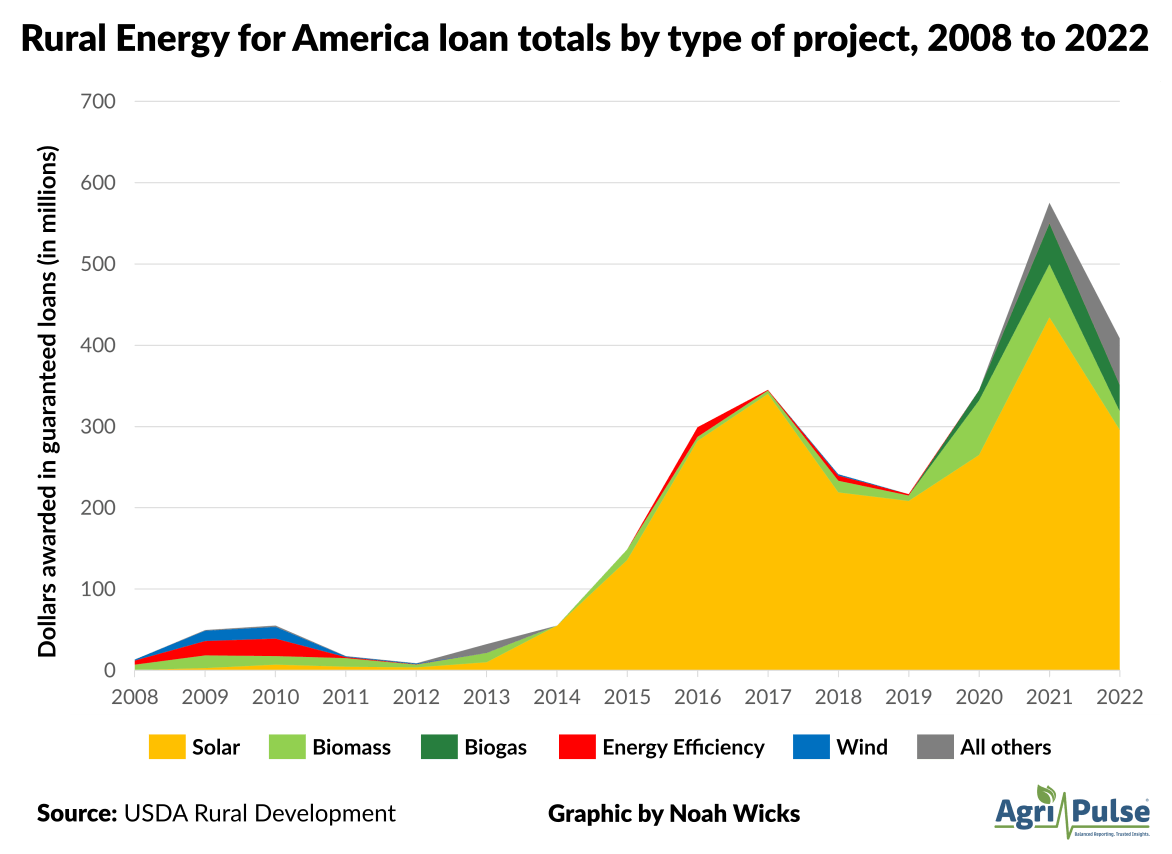 USDA's Neal said the department is taking three things into account as it goes about apportioning the new dollars. First, she said the agency will work to align the REAP funding with the White House’s Justice40 initiative, which focuses on investments to “disadvantaged communities that are marginalized, underserved, and overburdened by pollution.”

Second, the department is taking into account the language in the bill that points some of the funding to “underutilized technologies,” Neal said. While she noted that REAP is a “technology neutral program,” she added that her agency is hoping to find ways to ensure that all technologies are “well represented” in the award portfolios.

Finally, Neal said the agency is also looking at how to effectively provide technical assistance to farmers and rural small businesses to apply for funding.

“We’re excited about how this program can be expanded so that it’s not only serving the people who are currently applying, but also can serve, ideally, people who are eligible who may not have known about this program,” she said.

Iowa, which has been a top recipient of REAP funding since the program began, received the largest share of grants in FY22 at $2.4 million, followed by Minnesota at $2.3 million, Missouri at $1.6 million and North Carolina at $1.5 million.

South Carolina received the largest share of guaranteed loans at $84.9 million in FY22, followed by Maine with $71.3 million, Kentucky with $50 million and North Carolina with $40.4 million.

By comparison, California received $32.5 million in guaranteed loans in FY22 and $890,608 in grants. Texas received $1.3 million in grants and no loans.