WASHINGTON, Feb. 1, 2017 - Talk of reduced regulations and a fresh ag policy perspective is all well and good, but a pair of former USDA officials say agriculture should be leery of too much of a good thing.

President Donald Trump’s rapid-fire policy action in his opening days in office has been met with a mixed reaction in agriculture. There’s some measured applause for his pledge to trim some regulations from the federal rolls, but his actions on trade are viewed with concern.

Speaking at a meeting of the National Association of State Departments of Agriculture in Washington on Tuesday, Joe Glauber, a chief economist at USDA during the George W. Bush and Barack Obama presidencies, said potential trade wars with three of the biggest trading partners for U.S. agriculture – China, Canada, and Mexico – are worrisome.

“You’re talking countries where we have almost $60 billion of exports going to those countries,” said Glauber, who is now a senior fellow at International Food Policy Research Institute. “And I talk about producers, but consumers would be hit by that too.”

Trump has talked tough on China and has been vocal with his desire to renegotiate the North American Free Trade Agreement with Canada and Mexico.

“Over the last 20 years, have we had a lot of disputes with both countries? Absolutely, and that’s to be expected,” Glauber said. “I think from that perspective, if one were to go into renegotiation with these agreements, you could have a win-win. I think the more difficult thing is if you think you’re going to start renegotiating tariffs or other sorts of things. … I think that those come with a cost.”

He added that formal renegotiations would at least be orderly, rather than “unilateral action which has some reciprocal effect” in which “all countries stand to lose.”

A policy floating around executive and legislative circles at the moment lives somewhere between the realms of trade and tax policy, and it’s generating some concern about its implications. The policy – a plan to add a border adjustment tax – has been suggested as a way to pay for Trump’s desired border wall. However, the tax is also seen as an avenue to lower domestic taxes without shorting the government on revenue. John Bode, president and CEO of the Corn Refiners Association, said the agricultural implications of the provision could be huge.

On the regulatory front, Kathleen Merrigan, a former USDA deputy secretary during the Obama administration who is now the director of sustainability at George Washington University, said slimming down regulations will not be without consequences. Trump has called for cutting two regulations for every one published. While the “gobbledygook” nature of regs can make it difficult to understand their significance, Merrigan said that doesn’t make them any less important.

“Be careful what you ask for, because most USDA regulations – even the ones that are most unpopular and controversial (like) catfish (inspections) – somebody wants it,” she said. 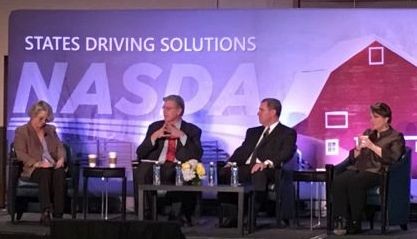 “The tone in this town right now is one that is very unhealthy, and I can say career employees are feeling very anxious,” she said, adding that it was “not just a Trump administration thing,” but rather a feeling of resentment against the federal government.

The big challenge is, how to get “our new political leaders to understand that they need to honor and value the career civil servants.” Merrigan said. “Because that’s the only way that they’re going to succeed.”