WASHINGTON, Feb. 22, 2017 - The Republican Congress is getting a unified message from farm groups, conservation organizations and nutrition advocates: Don’t cut the farm bill. More than 500 national, state and local farm, conservation and nutrition organizations have signed a letter urging the House and Senate budget committees not to propose cuts in the farm bill that this Congress will be writing.

The groups point out that the 2014 farm bill was required to make $23 billion in cuts, and that spending on crop insurance and nutrition assistance is dropping sharply, according to recent cost estimates.

The letter says the House and Senate Agriculture committees should be allowed to write a new farm bill “without arbitrary budget cuts or caps.”

“With the agriculture and rural economy struggling, households across the country struggling to meet their basic needs for nutrition, and farm income down 46 percent from only three years ago, it would be perilous to hinder development and passage of the 2018 Farm Bill with further cuts,” the letter says.

Read the letter here. Check out the second part of our farm bill series, “Lesson #2: The Farm Bill ‘Math’ is complicated and ever-changing,” a deep dive into the funding issues facing lawmakers.

House subcommittees set farm bill hearings. The House Agriculture Committee has announced its first subcommittee hearings on the next farm bill. The first will be next Tuesday morning on conservation programs. The second hearing, scheduled Tuesday afternoon, will be on international market development.

The Senate Agriculture Committee will hold its first field hearing on the farm bill this Thursday afternoon at Kansas State University. 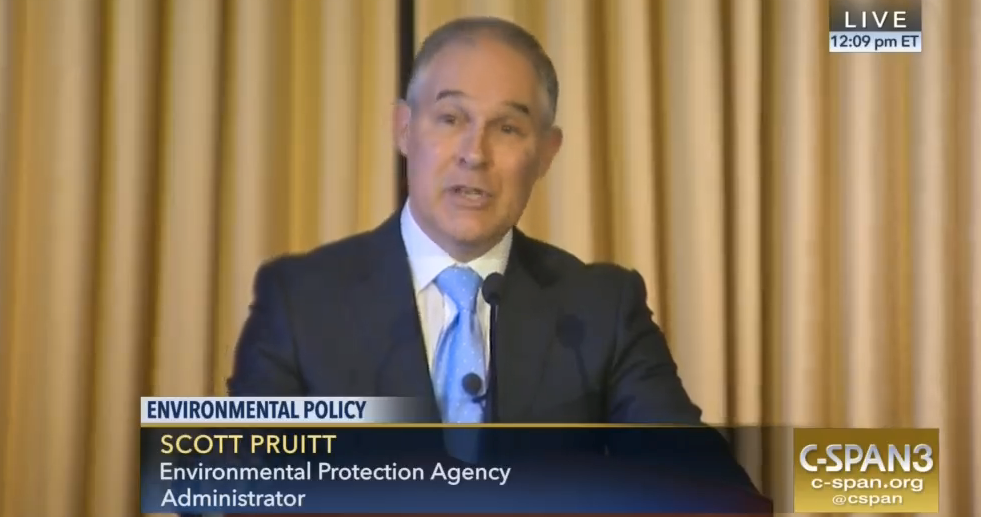 New EPA chief emphasizes process, federalism. Scott Pruitt used his first speech as administrator of the EPA to warn the agency that he intends to rein in the department’s regulatory actions and defer to states more often.

In an address to EPA employees yesterday, Pruitt emphasized the need to follow the formal and lengthy rule making process rather than using guidance documents and consent decrees to compel environmental improvements. The procedures for writing regulations require an agency to seek and respond to comments about proposed rules.

Pruitt said that state regulators should be viewed as “partners …not adversaries.”

“We as an agency and nation can be pro-energy and jobs and environment. We don’t have to choose,” Pruitt said.

Pruitt didn’t address specific environmental issues or regulations, although he said in a recent interview that one of his first priorities will be withdrawing the “waters of the U.S.” rule.

For more on Pruitt’s remarks, a look at how tax reform could affect the agriculture sector, and a key decision awaiting Agriculture Secretary-nominee Sonny Perdue, be sure and read this week’s Agri-Pulse newsletter. It hits inboxes today.

CRA author urges wider use of law to nullify rules. A lawyer who helped write the Congressional Review Act 21 years ago argues that it could be used to eliminate more regulations than just the ones that were finalized in the last months of the Obama administration.

Todd Gaziano, who is a senior fellow in constitutional law at the Pacific Legal Foundation, will speak on the issue today at an event sponsored by the Heritage Foundation. Back in 1996, Gaziano was an aide to then Rep. David MacIntosh, R-Ind., who sponsored the law.

DHS issues immigration orders. The Department of Homeland Security has released a series of documents providing more detail on how it will carry out President Trump’s executive orders on border security and deportation priorities.

Among other things, the department says that Immigration and Customs Enforcement is working on a plan to hire 10,000 more enforcement agents.

White House spokesman Sean Spicer says the department is working on a funding request to Congress while trying to determine how many agents can be hired within the existing budget.

Spicer emphasized that the “No. 1 priority” for deportation will be “people who pose a threat” to the country. But there is plenty of reason for farms and other employers to be concerned. The DHS documents say, for example, that anyone who has “knowingly defrauded the government or a public benefit system will be priority enforcement targets.”

Andrew McCarthy, a former federal prosecutor, says the deportation priorities will extend to people who have used fraudulent ID to get jobs or to apply for welfare benefits.

Frank Gasperini, executive vice president of the National Council of Agricultural Employers, says ICE is clearly signaling that farms will be audited more often and that they should start using the E-Verify system to check the employment status of workers.

USDA lauded for decision to post catfish rejections. It used to be that reporters and the public had to count on leaks from USDA to know when inspectors had rejected a shipment of imported catfish from countries like Vietnam. But USDA’s Food Safety Inspection Service has now decided to regularly post the rejections for all to see.

Food safety advocates are pleased with the agency’s action. Wenonah Hauter, executive director of Food and Water Watch, says her group will no longer have to use the Freedom of Information Act to get FSIS to release information about imported products that inspectors have rejected.

He said it. “I think our nation has done better than any in the world at making sure we do the job of protecting our natural resources and environment while also respecting the economic growth and jobs our nation seeks to have.” - EPA Administrator Scott Pruitt.