WASHINGTON, Feb. 22, 2017 - On Sonny Perdue’s first day in office as the next agriculture secretary – should he be confirmed – he will be presented with options on how to restructure USDA to include a new under secretary to deal solely with international trade, government sources say.

It will be a complex undertaking to create a new USDA mission area that will encompass the trade functions scattered throughout other USDA agencies, but it’s also a mandate from Congress with plenty of support on Capitol Hill.

“The Office of the Chief Economist has collected input from USDA (agencies) and developed a report for the new secretary when he gets confirmed,” said a government source. “The next steps will be taken at that point.” The source said it won’t be a single proposal, but rather a menu of options, and each one will come with a cost-benefit analysis.

Details of the report were not available, but sources say it is structured along the lines of a preliminary report that USDA contracted with the National Academy of Public Administration to prepare. USDA currently has seven mission areas directed by under

As to how similar the two documents are, sources would not comment.  However, one government source did say that a thorough vetting has been undertaken to decide which parts of the separate USDA agencies could be melded together under a new trade under secretary.

FAS focuses solely on trade, but there are trade components in many of USDA’s other 18 agencies, like the Agricultural Marketing Service (AMS); Animal and Plant Health Inspection Service (APHIS); Grain Inspection, Packers and Stockyards Administration (GIPSA); and the Food Safety and Inspection Service (FSIS).

However, just because an agency has a function that deals with trade, doesn’t meant that function would transfer to the new trade mission area, another source said.

It may be a matter of choosing what fits into a new division that will concentrate only on promoting U.S. agricultural exports, the source said. That will largely be up to Perdue, presuming he is confirmed. Negotiating international trade deals would be mostly up to the Secretary of Commerce and the USTR.

“There are different opinions even among the advocates of how you should arrange the deck chairs,” said Darci Vetter, formerly the chief agricultural negotiator for the U.S. Trade Representative.

Perdue, a former Georgia governor, is widely supported by both Republicans and Democrats and generally considered one of the least controversial cabinet nominees chosen by President Donald Trump, but he still hasn’t had a confirmation hearing. Senate Agriculture Chair Pat Roberts told Agri-Pulse that he wants to hold a hearing as soon as possible, but he continues to wait for Perdue’s paperwork to reach his office. 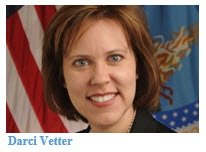 The next secretary could choose to not create a new trade under secretary position, but such a decision would likely provoke lawmakers. It was Congress, in the 2014 farm bill, that mandated USDA create the new position with a sole focus on trade. Lawmakers are now beginning to debate the 2018 farm bill. The House Agriculture Committee held its first 2018 farm bill hearing last week and the Senate Agriculture Committee’s first hearing will be on Thursday.

Vetter, who was a deputy undersecretary for the Farm and Foreign Agricultural Services before moving to USTR during the Obama administration, strongly supports creating the new position. “What I think USDA does need is a much-coordinated approach across all areas to forward our international relationships with other countries,” she said in an interview. “There’s a lot that USDA contributes internationally and it would be good if it was done in a coordinated fashion.”

It’s been more than three years since the 2014 farm bill was signed into law and former USDA Secretary Tom Vilsack spent much of that time explaining why he wasn’t creating the new position. Part of the explanation was the complexity of making such a big change to the USDA structure while the current makeup of the department was solidified. By statute, there can be only seven under secretaries and an eighth cannot be created.

Another factor voiced by Vilsack was his insistence that such a massive change shouldn’t be made just before a new administration took office. In a statement, he said he was unsure “whether or not it is appropriate or fair that an administration that’s sort of in its last quarter is doing something that will have a very significant and profound impact on the next administration without that administration having any say or involvement.”