Livestock haulers push back on DOT’s ‘Hours of Service’ rule

WASHINGTON, Sept. 27, 2017 - Livestock haulers have lost discretionary control over their livelihoods and risk endangering the lives of the animals they are transporting because of a one-size-fits-all Department of Transportation Hours of Service (HOS) rule and the Electronic Logging Device that aggressively monitors it, industry experts and agricultural groups say.

The device, known as an ELD, will be mandatory in each truck starting Dec. 18 if DOT fails to grant a waiver or Congress fails to act.

The HOS rule is part of the MAP-21, or the Moving Ahead for Progress in the 21st Century Act, which became law in October 2012. It states that drivers must not drive for more than 11 consecutive hours and need to be off the road for 10. That creates a problem, however, for livestock haulers who cannot just pull off to the side of the road with a load of cattle or pigs that might die from heat exhaustion in the summer or freeze to death in winter months.

The rule’s implications, though, have been heightened now that the ELD monitors compliance with the rule and stores violations in its memory, ready to be downloaded by inspectors from the Federal Motor Carrier Safety Administration, DOT’s highway safety enforcement unit.

“DOT HOS rules do not differentiate between haulers who haul inanimate objects and those that haul living, breathing beings,” said Michael Formica, assistant vice president and legal counsel with the National Pork Producers Council. “The rule is just not practical.”

Earlier this month, Formica sent Transportation Secretary Elaine Chao a petition signed by several prominent agricultural groups including the National Cattlemen’s Beef Association and the American Farm Bureau Federation, asking for a waiver and limited exemption on implementation of the mandate for livestock haulers. The groups also asked for a review of both the HOS rule and the ELD device itself, noting that there are problems with standardization of functionality among device manufacturers and that the device can’t be overridden in situations that require human intervention or discretionary decision-making to ensure accurate and fair compliance, Formica said. 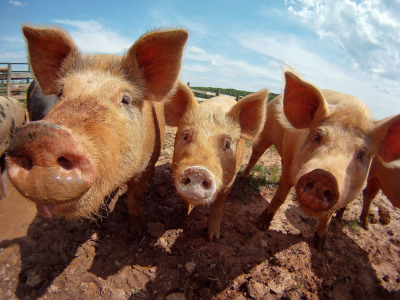 For now, unless Congress amends the legislation, many small independent livestock trucking firms could soon be facing fines and driver’s license problems, Formica said, as there are no incentives to radically alter their business models to fit what industry experts call a preconceived notion of safety.

Formica noted that in many cases, drivers cannot afford to make the change to ELD devices without assistance — the device costs several hundred dollars to purchase and $50 per month to maintain — and as of now they lack the training to be able to implement the HOS rule within their existing daily schedules.

What’s more, some ELDs on the market do not even allow for the so-called agricultural exemption to be programmed in, said Steve Hilker of Steve Hilker Trucking in Cimarron, Kansas. This exemption — only active in certain states at certain times of the year — states that if a hauler is driving within 150 air miles of where he picked up his load, he does not have to start counting his time. This is because livestock haulers often have many variables affecting when they can take off from their pick-up point, Hilker said.

Certificates of veterinary inspection and branding verifications for disease traceability purposes might delay the driver for as long as two hours, and often the farms where the load will be picked up are in rural areas where the roads are poor and muddy, which can cause further delays. Cattle and hogs are also notoriously difficult to herd into a vehicle and this anxiety-laden process can often add to drive times, Hilker said.

A DOT official stated that safety is the reason that the agency instituted the new rules and the monitoring devices will save lives on the road.

Currently, when drivers encounter situations that cause them to violate the 11-hour rule by as little as an hour or so, they can simply log the reason why on paper and talk to inspectors about what was going on. With the electronic system, Formica said, these kinds of annotations are not always possible, as the device may be unable to differentiate between a just and an unjust violation when it saves the data.

Hilker said the new regulations could affect disease traceability, a priority within the ag sector.

If a driver has to temporarily unload his cattle in transit to avoid violating HOS rules, there are a limited number of so-called common facilities that can handle this, he said. At these facilities, cattle are arriving from all over the country, Hilker said.

“They (drivers) lose the ability to backtrack for disease traceability,” Hilker said. “If you start going into a common facility and animals get commingled on the ground, the ability to backtrack that is lost. If this law goes through as is, you will have to do one of three things — either unload in transit, park along the side of the road for 10 hours, or the guy is going to have to operate illegally to protect the safety of his animals. Those are the three options.”

One solution would be to allow drivers to split their required 10 consecutive hours into more manageable non-consecutive increments with intervening drive time in order to preserve the safety and well-being of the animals, livestock hauler Ty Rosburg said.

For example, in this so-called split-sleeper berth scenario, the driver could sleep for six hours and then resume driving, splitting up his remaining required four hours off into two, 2-hour naps if the situation warranted it, Rosburg said.