Food loss and waste in the United States is a huge issue. Not only is food that could have helped feed those in need discarded, but scarce resources — land, water, energy, and labor used to produce, process, transport, prepare, store, and ultimately dispose of the discarded food — could have been employed elsewhere. In fact, food waste is the single largest category of material sent to municipal landfills.

To deal with the issue, three U.S. agencies—USDA, the U.S. Environmental Protection Agency, and the Food and Drug Administration — recently announced the signing of a joint agency formal agreement under the Winning on Reducing Food Waste initiative. The initiative is aimed at improving coordination and communication across federal agencies to better educate Americans on the importance of reducing food waste.

“An unacceptable percentage of our food supply is lost or wasted,” Agriculture Secretary Sonny Perdue said in a press release announcing the initiative. “As the world’s population continues to grow and the food systems continue to evolve, now is the time for action to educate consumers and businesses alike on the need for food waste reduction. I am pleased to be joined by my Trump administration colleagues on this important, common sense issue. The future of food depends on action from us now, which is why we have established this formal partnership among USDA, EPA, and FDA.”

USDA’s Economic Research Service (ERS) defines food loss and waste as “the edible amount of food, post-harvest, that is available for human consumption but is not consumed for any reason. It includes cooking loss and natural shrinkage (for example, moisture loss); loss from mold, pests, or inadequate climate control; and food waste.”

Food loss and waste in the United States is estimated to be between 30 percent and 40 percent of the entire food supply, based on 2010 estimates by ERS. These estimates also show that 31 percent of food loss and waste occurs at the retail and consumer levels, which equates to approximately 133 billion pounds or $161 billion worth of food annually.

“The ERS numbers, which are just for the end of the chain — the retail and consumer sectors — do not include the inedible portion of food such as bones, peels, and corn husks. We are interested in what people have available to eat, and of that, what amount is lost or wasted,” says Elise Golan, director for sustainable development in USDA’s Office of the Chief Economist. “ERS is currently updating its food loss and waste estimates, and it is going to be interesting to see how those numbers change.” In 2013, USDA launched several ongoing efforts to combat food loss and waste. 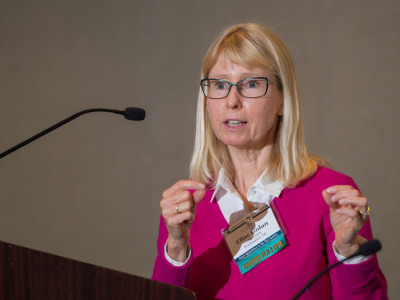 EPA, on the other hand, is interested in how food loss and waste is regulated and managed so as to minimize its impact on the environment. As such, EPA estimates include the inedible portion of food — bones, peels, skins — because it also ends up in landfills, while FDA is concerned with wasting food that could help feed and nourish those in need.

According to Refed, a data-driven website dedicated to reducing food waste, each year U.S. consumers, businesses, and farms spend $218 billion, or 1.3 percent of U.S. gross domestic product, growing, processing, transporting, and disposing of food that is never eaten. That equates to 63 million tons of food annually sent to landfills, of which 10 million tons is lost at the farm level, 1 million tons is wasted during manufacturing, 25 million tons by consumer-facing businesses, and 27 million tons in homes. Meanwhile, one in seven Americans suffer from food insecurity.

The U.S. Food Loss and Waste 2030 Champions is a new collaborative effort by USDA, FDA, and EPA. “Champions” are businesses and organizations that have made a public commitment to reduce food loss and waste within their own U.S. establishments by half by the year 2030. Today, there are 23 “Champions” representing food service, restaurants, resorts and hotels, wholesalers and retailers, and food manufacturers, including companies like General Mills, Hilton, PepsiCo, and Walmart.

“We know that this is not something the government on its own can take on,” Golan says. “Every actor along the food chain needs to take action. The Champions program is really important and will help the country move forward.” While all three agencies play an important role in the nation’s food supply, USDA is uniquely positioned to combat food loss and waste.

Tara McHugh, director of USDA’s ARS Western Regional Research Center in Albany, Calif., says that “ARS research is crucial to reducing food waste because of our diverse scientific expertise in food production, processing, and nutrition, as well as our strong ties to stakeholders and long history of successful technology transfer to solve problems of importance to agriculture in the United States.”

For example, ARS labs have developed technologies that can prolong shelf life and reduce waste, including packaging that doubles the storage life of small fruits by reducing moisture loss, and an in-package cold plasma system to improve the shelf life of poultry products. ARS scientists have also extended the shelf life of microgreens by elevating carbon dioxide and reducing oxygen levels in post-harvest storage.

ARS scientists also develop new products from food waste on a routine basis. For example, McHugh’s Albany lab recently developed a natural vitamin D protective film made from mushroom-stalk waste. The lab first developed a novel ultraviolet (UV)-B light treatment in partnership with Monterey Mushrooms, in Monterey, Calif., to extend the shelf-life of fresh cut mushrooms. The treatment was then applied to mushroom-stalk waste, which when dried provides a colorless, tasteless vegetarian powder high in vitamin D, notes McHugh.  When applied as a film-coating to fruit bars and fresh-cut melons, this powder also helps preserve quality and safety, while increasing shelf life.

The process has been used commercially for more than a year, McHugh adds, and several companies now sell mushroom powders as a healthy source of vitamin D. Similarly, an ARS lab in Raleigh, N.C., is finding peanut skins typically discarded when manufacturing peanut butter can be used as a new food ingredient to increase the antioxidant content of foods.

Developing new products from food waste can go a long way toward reducing overall loss. For instance, according to USDA, in 2017 the U.S. produced 44 billion pounds of potatoes, and two-thirds of them were processed. Processing generates between 15 percent and 40 percent waste byproducts, according to recent study. 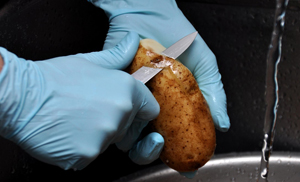 However, potato peels are known to contain bioactive compounds called phenolic acids and glycoalkaloids, which with more research could one day help reduce weight gain and possibly control blood cholesterol levels. Wally Yokoyama, research chemist at the Albany lab, warns, however, that glycoalkaloids found in potato peels can be toxic, so intake would have to be carefully controlled.

“We evaluated the effects of peels from red, gold and russet potatoes in mice fed high-fat diets. All peels reduced adipose weight gain and reduced the level of LDL-cholesterol compared to HDL-cholesterol. Red and gold potato peels lowered adipose weight more than russets,” Yokoyama said. “In recent years, science has recognized that bacteria in the gut play an important role in obesity and chronic disease. In our study, we showed that potato peels increased the phylum of bacteria associated with lower weight gain compared to mice not fed the peels. This may be the first study of effect of potato peels on obesity and that shows changes in gut bacteria.”

Similar ARS studies are being conducted across the country on apple peels and other byproducts of the food manufacturing industry to help reduce food waste while putting money in farmers’ pockets and creating consumer products. “I find that really exciting,” Golan says.