Fraud, regulatory hurdles and the transition period from conventional to organic farming all present unique challenges for the growing organic industry, but one of its biggest problems is one also faced by conventional agriculture: a lack of enough workers.

“Immigration, labor, a solid labor pool is everything for us… But that workforce is aging out and we are having a tougher time replacing those workers,” said Jeff Huckaby, president of Grimmway Farms/Cal-Organic, during Wednesday's House Ag Biotechnology, Horticulture and Research Subcommittee hearing. “We’re now farming in seven different states and it’s an issue in all seven states that we farm.”

“In my organic production, we have to till the soil. That is our only form of weed management… And where I farm it’s a desert, it's dry, and the only two forms of weed management in cotton production when you are going across 1,000 acres is tillage or manual removal of the weeds, and that’s the labor issue that we have to deal with.”

Organic production has grown rapidly over the past two decades, from an $8-billion-a-year industry when USDA  issued the national organic standards in 2002 to over $52 billion today, according to Huckaby. Produce is the leading organic category, with over 40% of the market.

"I don’t look at [fraud] as a big problem in the U.S. We are really highly regulated and we are very highly monitored," he added. "The enforcement [is] there. And every year we get better." 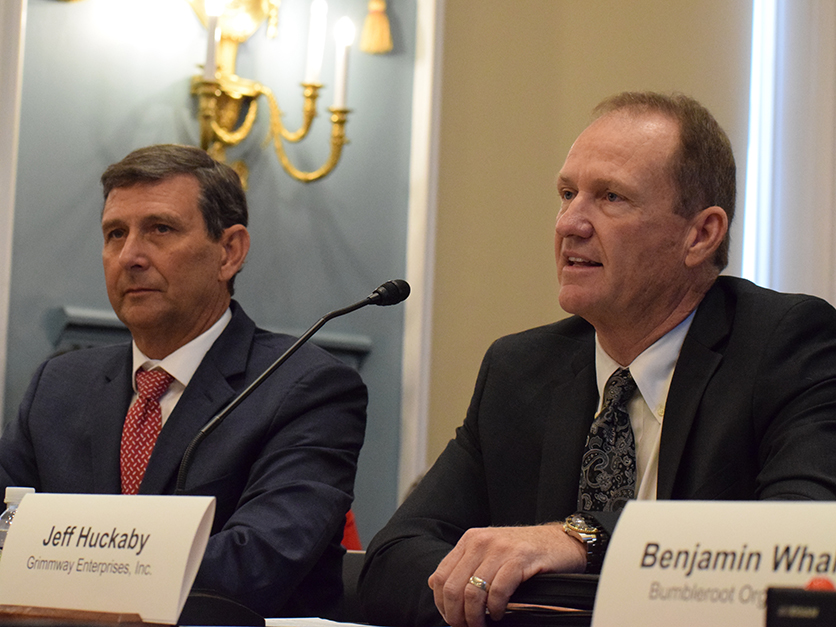 Rep. Rodney Davis, R-Ill., brought up the issue of supply and demand, asking how U.S. organic farmers can meet growing demand without having to import organic produce from other countries. Huckaby replied that one of the obstacles to switching to organic farming is the three-year transition period.

"To me it is a great period of time for you to rebuild your soil ... but it takes a lot of money and willingness to sit out three years [of production]," Huckaby said. He urged Congress to work with USDA to create a stronger subsidy program to entice farmers to make the move to organic.

Another major challenge is finding affordable farmland and secure land tenure, testified Ben Whalen, a farmer who owns Bumbleroot Organic Farm in Windham, Maine. He said many of his peers have closed their businesses because they were unable to find long-term land. Between 2012 and 2017, 146,000 acres of farmland were lost in Maine. Whalen called for increased funding for farmland protection.

“Yes, I do believe it,” Huckaby said, “You can’t cut corners and you can’t take short cuts and there’s no overnight fix, but with a long-term strategic plan we feel like we can produce as many organic crops as we can conventionally.”

Brown added that the biggest challenge to scaling agriculture “whether it's organic or non-organic” are rising input costs.

A theme that was stressed throughout the hearing was the need for a strong regulatory framework to create a level playing field in the marketplace. “I think as a farmer, most want less regulations … but with organic for us to have a highly regulated sector, everyone needs to have the same standards and rules and regulations,” said Huckaby. “It’s important to the consumer” to know exactly what they are getting when they “decide to pay more for organic.”