The Air Resources Board last week adopted a measure for incentivizing farmers in the San Joaquin Valley to upgrade their tractors and harvesters to meet air quality goals.

The decision over funding the measure now lies with Gov. Gavin Newsom as he outlines his initial budget draft, which is due Jan. 10. The measure calls for “a major down payment” for the incentives program.

CARB had adopted a plan in January to reduce nitrogen oxide and particulate matter pollution in the valley. Part of that required CARB to take action on incentivizing the turnover of agricultural equipment.

Sound familiar? The measure adds to existing efforts from state and federal incentives programs. In the last five years, about $430 million have been invested in ag equipment upgrades, replacing about 3,200 pieces of equipment across California. This has pushed the state halfway toward meeting its 2025 goals.

Newsom cut the budget this year for one of those programs, known by the acronym FARMER, from $137 million to $65 million. Manuel Cunya of the Nisei Farmers League said the program now needs $190 million to make up for the backlog.

“The farmers have put in a lot of money,” he said. “They don't get a free tractor or harvester.”

Staff from the air district noted that "a lot of the cost share" is coming from the agricultural community. The district is applying the government funding to just half of each project’s total costs.

Roger Isom of the California Cotton Ginners and Growers Association called the FARMER program a success, but noted, “There's over $200 million in applications sitting at the district right now that can't be funded.”

Scientists say protecting delta smelt “may be too little too late”

Their verdict is that “there is little guarantee” the $1.5 billion to be spent on habitat restoration “will make a difference for the smelt.” The critically endangered smelt is an indicator species for the overall health of the Sacramento-San Joaquin Delta ecosystem. The delta suffered an irreversible decline in good smelt habitat from the 1960s through the ‘80s.

Setting aside a significant amount of water could increase the smelt’s odds, the researchers claim. The State Water Board’s Bay Delta Plan dedicates a fixed amount – with up to 50% of unimpaired flows – to supporting the ecosystem, with more likely in the second phase. The researchers argue that instead of this year-round fixed percentage, this should be managed as an “environmental flow right” based on ecosystem needs.

This allows more time for the parties to negotiate a new long-term agreement starting in 2026. That’s when the rules are set to expire along with an emergency drought agreement signed by the states in May. Bureau of Reclamation Commissioner Brenda Burman led those negotiations, applauding the work as “a model for interstate and international cooperation.”

Keep in mind: The Imperial Irrigation District refused to sign onto the drought agreement. It has remained steadfast that any long-term plan must include funding for managing the Salton Sea. The growing environmental crisis stems from a reduction in water flows from irrigation runoff and a contentious water conservation agreement between California water districts.

US will verify China’s ag purchases

It should be very easy to show if China doesn’t live up to promises to buy $40-$50 billion worth of U.S. ag commodities, says Senate Finance Committee Chairman Chuck Grassley.

“When it comes to purchases of agricultural products … we’re going to be able to quantify whether or not they’re living up to that,” said Grassley, who appeared on Fox Business.

The House Ways and Means Committee today will debate the implementing bill for the U.S.-Mexico-Canada Agreement, the second to last milestone before the trade pact is expected to be approved with a final floor vote this week.

By the way:  Mexico threw a last-minute curveball that threatened to derail the process, but the issue has been resolved with no impact on the USMCA bill. 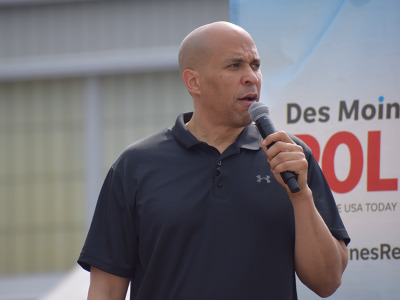 A poll released last week by Johns Hopkins University’s Center for a Livable Future shows 53% of Iowa voters — and 77% of Democrats — favor a statewide moratorium on CAFOs.

Keep in mind: Booker’s bill, which also would make livestock and poultry integrators responsible for air and water pollution at CAFOs, isn’t going anywhere in Congress.

California has more than 1,200 dairies in total. EPA defines large CAFOs as having 700 or more mature dairy cattle. While the latest USDA census categorized herd sizes differently, it did note that more than 70% of California’s dairies have 500 cows or more.

Electricity rates a rising hurdle for equipment upgrades
Daybreak: Rice gets a boost in Korea