Home » Three questions for a leader in dairy policy
WEST

“I have been able to really blend a lot of my background in policy work with private sector experience in my current job,” she told Agri-Pulse in an interview this week.

Raudabaugh spent nearly a decade in Washington, D.C., working for a Sacramento-based congressman, then the House Agriculture Committee and the Office of Management and Budget for both Presidents Bush and Obama, while covering several farm bills. Returning to California, she delved into environmental policy, specializing in the California Environmental Quality Act, and was active in litigation related to ag lands seized for the high-speed rail project, before joining Western United Dairies (WUD).

WUD represents 860 of the 1,100 dairies left in California, encompassing a broad range of dairy sizes and production practices. Raudabaugh said the trade association engages heavily in environmental policy, milk pricing and pooling policies, while focusing its messaging with lawmakers on the nutritional qualities of dairy.

Raudabaugh also explained the benefit of being the first ag group to endorse Newsom and WUD’s current work with the first partner on school nutrition programs.

The conversation has been edited for brevity and clarity.

1. How has WUD engaged with the Newsom administration?

When I came to (WUD) in late 2015, agriculture in general was not very receptive – at least in my point of view – to the viewpoints of California consumers. We often reflected and misinterpreted the signals coming out of the capital as a judgment of our business practice, when in fact it reflects the values of the California electorate.

After a very brief stint fighting some of the progressive policies in California related to the elimination of ag overtime, I was able to convince the board that we needed to do things differently. We needed to really look at where voters were evaluating their priorities.

We came up with three areas, mostly by tested polling, surveying and focus grouping. Voters, particularly in 2016 and 2018, were primarily concerned with three issue areas: One was housing. Two was healthcare. Three was the environment.

I went back to my board in early 2017 and said, “Here are the issues a vast majority of Californians are going to the polls to vote on. Whether we hold them in high regard is a different conversation. They're going to vote on these issues.”

The policy focus needed to shift towards things we're good at. We can't delve into the housing space much. We could influence them on the health quality and nutrition access part. But we particularly sit in the issue of environment, related to water quality, air quality and methane. We had made tremendous steps as an industry then – and more so now, just two years later.

What could we do with our money that would make the biggest amount of change? We decided in 2017, before the primary even, that we would back Gavin Newsom. We have a political strategist to this day that we'd hired, who looked at the polling and that was his advice.

We were the first agricultural organization to stand behind Newsom. We've stayed very consistent in our support over the years. We brought in the California Cattlemen Association and have a strong cow coalition around the governor. I continue to work with him to enhance his vision for California. It's not easy.

One thing I look towards on the science side, in terms of our success, is Newsom’s first policy priority – and our first priority at the time – to provide access to clean drinking water to the rural and disadvantaged communities we serve. Our dairies farm and drink the same water these disadvantaged communities do. We all have the same concerns about different contaminants throughout the valley. For years up to that point, Western United Dairies had pushed pieces of legislation very hard to maintain that access to drinking water. We thought it was a moral prerogative. Plus, we want our communities to be healthy.

We talked to him a lot about the need for more water, particularly south of Merced. That resulted in a lot of cohesion on changing the guard at the State Water Resources Control Board. When he opted to change the leadership there, that was a huge signal to us that he was ready to collaborate. 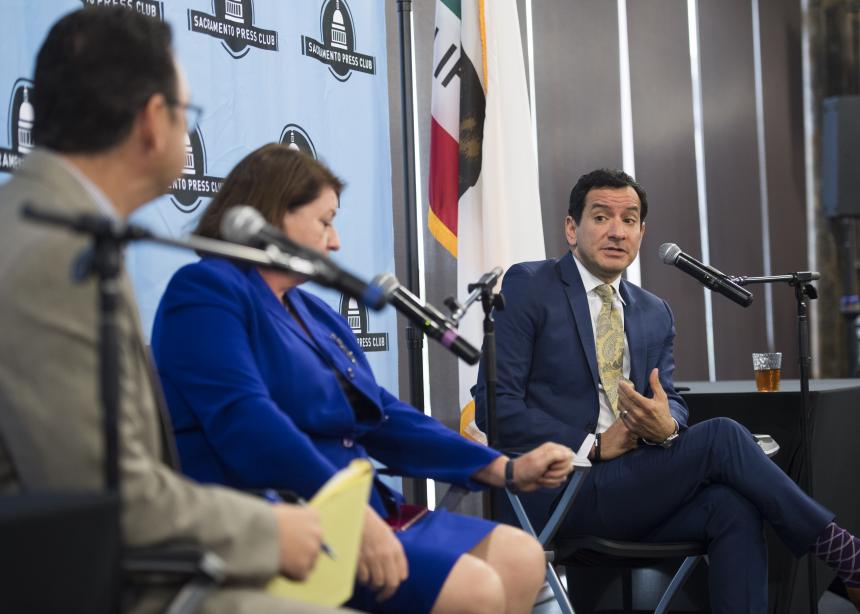 2. How do you engage with lawmakers in Sacramento?

We work hard to make sure our partnerships matter. We want to make sure we are enhancing people's knowledge about dairy farm production practices and enhancing people's point of view in the Legislature, particularly about who we are and who we're not. That's very difficult to do in agriculture, because the capital views us as a monolithic industry. We are not. We're very different.

Farmers are really not that good at expressing the personal sides of their lives. We shy away from it. That’s why we like to be in the country and don’t like to talk to people.

But it's become apparent the message about who disadvantaged communities are and who's at the center of bringing those communities together is essentially being spun for us.

As we engage with lawmakers, it's important to me if a high population of their communities might be using the school lunch program, for example. Right now, (Assembly Speaker Anthony Rendon’s Los Angeles district) has one of the highest consumptions of fluid milk in the United States, because a lot of his kids utilize the school lunch program. Those are areas where we try to focus our commonalities – particularly in the realm of nutrition access, because one in five kids in California is nutrition insecure.

We try to make sure we're well-aligned with Speaker Rendon and Senate Pro Tem Toni Atkins. They're important to us. We want to make sure that if there are people, particularly newer members of their caucus, they feel we need to reach out to, we do.

We're in it for the long haul and hope that we can be beneficial partners.

3. Are there any bills that you're watching closely this year?

A lot of spot bills were dropped on the deadline of February 21 that my government affairs team is still helping me go through. The policy meat is starting to come together.

I can see the nature of how these things are going to go. The bill numbers are going to change, and we don't have some sexy issue like AB 5.

Many of the bills are going to be blended into some big nutrition packages.

The governor's first partner, Jennifer Siebel Newsom, has released a school lunch funding program that's emphasizing a whole range of tools that school districts don't have right now. Essentially, it’s the ability to modernize their cafeterias and maybe offer salad bars or fresher lunch options. There are some schools in California that are severely behind on modernization. Her package does that, and we're excited about it.

Usually, with fresh options, comes fresh dairy options, like cheese, butter and particularly on the milk side. These are really critical things for kids that need to learn: calcium and protein.

Everybody looks at these massive, sweeping policy changes when they say “farm-to-fork” or “farm-to-school.” But there are concerns that we're going to make this all-organic or a massive effort at pushing plant-based products.

We're watching that with intense interest. It presents a tremendous amount of opportunities for our farmers. But it also means a lot of people have their own plans about how it's going to go. As usual in policy work, it's going to be a combination of wins.

Last year, we beat back several proposals with the assistance of the American Diabetes Association and the American Heart Association. We've been partnering with coalitions like that because those are folks who can elevate that message in a way I can't.

It is budget season until the May revise and the eventual June budget comes through. We're going to be hot and heavy on methane reduction funding. Since 2017, we have been supporters of the cap-and-trade program, along with most of agriculture. In exchange for support, ag has been given lots of programs around reductions and incentivizing reductions in emissions.

In 2016, the dairy industry was regulated for methane. We're 25% of the 40% reduction goal as of this year, according to CDFA. We're making good progress. But we're concerned that each year there's been quite a bit less funding. There's a combination of factors associated with that. We're going to continue to push for some modest increases.