Stung by scenes of farmers dumping milk and plowing under crops, the Trump administration is launching a never-before-tried plan to use the nation’s commercial food distributors to buy fresh produce, dairy products and meat and give them away to needy families across the country.

The Agriculture Department is scheduled to award the first contracts for the “Farmers to Families Food Box” program on Friday, just two weeks after it released the rules for the plan that was hastily cobbled together under a $19 billion coronavirus relief program that Agriculture Secretary Sonny Perdue announced April 17.

More than 600 companies and organizations have put in bids for the program, according to the United Fresh Produce Association.

“The department is under increased pressure to make something happen quickly because everyone is seeing these lines of people waiting at food banks to get food, and the department is genuinely wanting to respond to that,” said Michael Dykes, president and CEO of the International Dairy Foods Association.

Some say USDA should have acted sooner to divert surplus commodities.

Former Sen. Heidi Heitkamp, who leads a group, the One Country Project, that is assisting rural Democratic candidates, accuses USDA in a new video of dragging its feet on dealing with the food system disruptions. “USDA has been late to appreciate the challenges of the supply chain. When we have people who need food, but we’re dumping milk, there’s a failure of leadership,” she says.

Critics also point out that the Food Box plan has hallmarks of Perdue's widely panned proposal to partially convert the Supplemental Nutrition Assistance Program into "Harvest Boxes" of fixed commodities.

There are big questions about the plan, and groups watching it say the answers won’t be clear until the bids are approved and the program begins to operate: How much of the money will go to food versus shipping and handling costs? To what extent will some regions and rural areas be left out? What happens as food distributors start to see their restaurant and other business return? In Texas, for example, where restaurants have reopened with restrictions, some distributors already have indicated to food banks that they are reluctant to get involved in the Food Box program.

The program’s goal is to spend at least $100 million each over the next six months on the three product categories: dairy products and fluid milk; fresh fruits and vegetables; and pork and chicken, commodities that were among those hurt the worst by the sudden closure of restaurants, schools, universities and other food service outlets. All of the food must be 100% U.S. produced and processed.

To get around the shortage of volunteers and refrigeration space facing food banks, the food is supposed to be packed in household-size boxes and trucked directly to sites, including schools and nonprofits, where it can be picked up by people who need it. The first deliveries are expected to begin in less than two weeks. Food banks were still working on distribution plans this week.

The goal is get the “box off the truck and in the trunk, if at all possible,” David Tuckwiller, a deputy administrator with USDA’s Agricultural Marketing Service, said on a webinar describing how the plan would work. 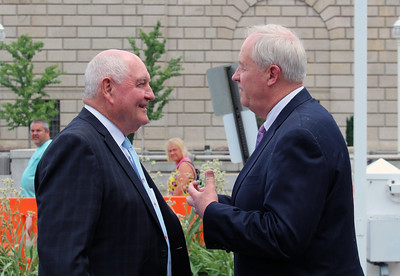 Tuckwiller freely acknowledged the challenge the program poses for AMS, the branch of USDA that is having to depart from its well-established process for buying millions of dollars of single commodities by the truckloads for schools and food banks.

Dykes praises USDA for thinking creatively about how to help producers who have been hit hardest by the COVID-19 crisis and said it will benefit farmers and processors as well as the needy.

“The situation just lends itself to this, and I think it will be a win for all of us, and we’ll do the right thing by feeding a growing number of people who are losing their jobs and are more dependent on the food banks and nonprofits to get groceries,” he said.

Dykes said USDA officials have shown a willingness to consider adjustments. One thing some dairy processors have asked for is flexibility to vary the mix of products in boxes depending on the dietary needs of different groups of recipients.

There is “a lot of interest in how the food supply chain can reconfigure itself on the fly. … I’m not sure any of us have the right answer.”

Many food banks have been swamped with demand. According to an April 13-15 survey, 95% of food banks in the Feeding America network reported an increase in demand for food assistance compared to last year, with an average increase of 70%.

The food service distributors seeking to participate in the program including Rosemont, Ill.-based US Foods. Spokeswoman Sara Matheu said US Foods would be tapping existing suppliers to provide the products, including meat, that USDA is seeking.

She also said “US Foods has an extensive network of distribution centers and transportation assets that are leveraged to serve both urban and rural communities.”

But some critics say the Food Box program is a cost-inefficient way of addressing food insecurity.

Scott Winship, executive director of the congressional Joint Economic Committee, said it would be better to either give the needy cash that they can use for food or to provide benefits through the existing Supplemental Nutrition Assistance Program.

“Picking out a select set of foods that you’re going to deliver to them without their having a say over or with any regard to whether that’s going to be the best thing for them is definitely the third best of those three options,” Winship said.

Advocates for small farms fear the program will be dominated by large producers and distributors. Bidders were required to specify to AMS how they would engage small-scale farmers, but the program’s food safety requirements will effectively exclude those producers, said Wes King, senior policy specialist for the National Sustainable Agriculture Coalition.

“Considering the unprecedented nature of the global crisis we are in, USDA could have very easily not required GAP audits and certification,” King said.

The program also is coming too late to help some of the farmers hit hardest by the pandemic; Florida vegetable growers were harvesting crops in March as their business with restaurants, hotels, cruise ships and other buyers disappeared virtually overnight.

Florida growers lost $523 million because of the pandemic, according to the Florida Department of Agriculture and Consumer Services. The losses include $40 million to $50 million to green bean producers, who saw their prices fall from $16 to $18 a box to as little as $6 a box in one week, the department says. Cucumber growers lost as much as $38 million.

“While we appreciate the effort of USDA … in setting these programs up, they really aren’t going to benefit Florida specialty crops in any meaningful way,” said Lisa Lochridge, a spokeswoman for the Florida Fruit and Vegetable Association.

Her group has instead put its focus on maximizing the direct payments that USDA is planning to make under a separate program. A proposed payment cap of $125,000 per commodity per farmer or $250,000 for all crops would fall far short of compensating growers for their pandemic-related losses, she said. The group is trying to persuade USDA to increase or eliminate the limits.