USDA’s top climate adviser is trying to dispel concerns that the administration’s carbon spending will crowd out private investors. That’s a concern shared by some entities that are building private carbon credit markets.

“We don’t want to compete with private investment,” says Robert Bonnie, a leading proponent of using USDA’s Commodity Credit Corp. spending authority to create a carbon bank that would buy and sell carbon credits. The idea is to help jump-start carbon markets.

“We actually want to figure out how to build policy in a way that invites more investment in agriculture, that gives producers more opportunities,” Bonnie said on a webinar sponsored by the AGree Economic and Environmental Risk Coalition.

Bonnie defended using the CCC for carbon trading, saying that “carbon is a commodity right now,” and the CCC is intended to help stabilize commodity markets.

But, but, but: Anne Simmons, the House Ag Committee’s majority staff director, cautioned that lawmakers will have a lot of questions about the concept. “Some of our members are going to ask, ‘Why do we need a carbon bank?’ ‘Who's going to buy the credits?’ All those questions still need to be asked,” she said.

‘Equity lens’ will be important

Bonnie cautioned that climate policies will have to work for minority farmers: “Thinking about that equity lens is going to be really, really important,” he said.

There are concerns that carbon credits will primarily benefit large, well-capitalized farms, and that the credits will drive up land values.

But Bonnie still has some work to do selling the administration’s policy to larger, conventional farms. For a variety of reasons, many aren’t convinced they will benefit, cautions Josh Tonsager, vice president of policy and communications for the National Association of Wheat Growers.

“The skepticism isn’t around whether climate change is real or happening or not. It’s around what the correct solutions are, and what it’s going to mean to their bottom line,” he said during a conference sponsored by the Crop Insurance and Reinsurance Bureau. One of the concerns: Cover crops compete for needed moisture in drier areas.

Private carbon programs continue to roll out. Land O’Lakes announced through its Truterra subsidiary the launch of its TruCarbon credit program. Its first customer will be Microsoft, which has announced a goal of being carbon-negative by 2030.

Participating farmers will be paid $20 per ton in the first tranche of credits this summer.

Take note: Qualifying farmers “may be compensated for carbon sequestration retroactively up to five years based on the soil health practices they adopted in prior growing seasons.” That provision gets at concerns that “early adopters’’ of conservation practices will be left out of carbon payments. 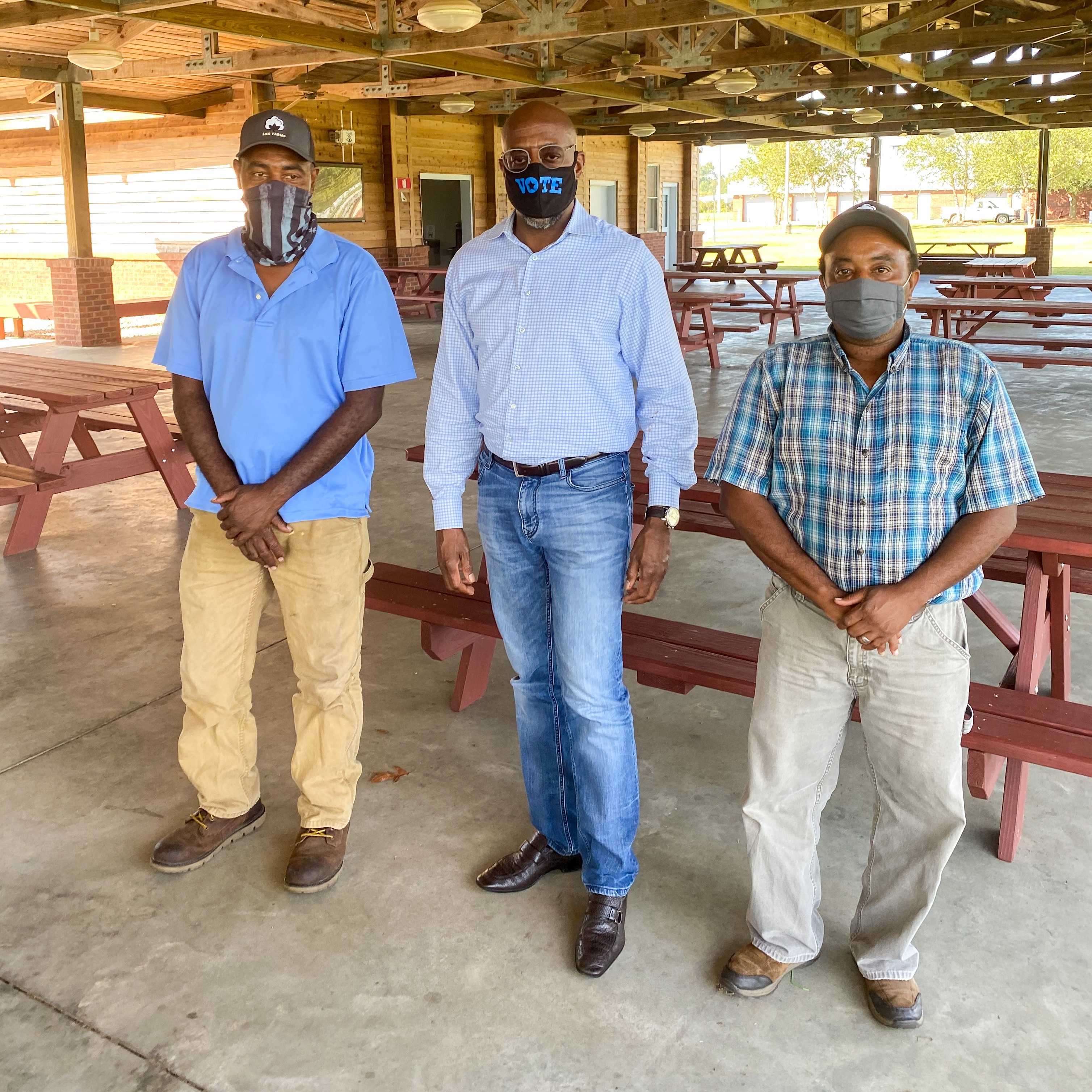 Sen. Warnock (middle) with two Georgia brothers who told him they are struggling to stay in business against larger farms. (Twitter)

Agri-Pulse caught up Thursday with one of five new members of the Senate Ag Committee, Georgia Democrat Raphael Warnock.

He says his priorities will include addressing the "concerns of independent, small farmers who too often don’t get their share, even of the subsidies." He cited some Black farmers in Georgia “who are living on the edge, and we need policy that is going to take seriously their concerns.”

He wants to provide debt relief to minority farmers and also ensure there is adequate nutrition assistance for needy families in “both rural and urban settings.”

Read our report on the new committee members here.

The Senate voted 99-1 Thursday night to ensure that health care providers get a significant share of funding in the next stimulus bill. During debate on a budget resolution that Democrats are using to advance a $1.9 trillion aid package, the Senate voted to set aside 20% of the provider relief funds for rural hospitals.

On a separate issue, the Senate voted 58-42 to prohibit the Biden administration from providing stimulus checks to illegal immigrants.

China’s purchases of U.S. corn hogged the headlines for the fourth week in January – the country purchased 5.86 million metric tons – but Chinese buyers were also busy purchasing U.S. soybeans for delivery this marketing year and the next.

Physical shipments were also strong for the Jan. 22-28 period. The U.S. shipped about 1.3 million tons of soybeans to China during the seven-day period.

USDA said it has “no evidence” of a data breach at its National Finance Center, following a Reuters report that cited unnamed sources saying suspected Chinese hackers had broken into government computers last year.

The NFC, which Reuters says was targeted in the breach, includes payroll services for more than 650,000 employees at more than 170 agencies. The hack would be the second targeting of SolarWinds’ Orion software. The first, involving Russian hackers, was revealed in December.

A USDA spokesperson says the department complied with a directive from Cybersecurity and Infrastructure Security Agency, notifying customers in December that “it had removed SolarWinds Orion products from its networks due to the SolarWinds compromise. While we continue to look into it, we have no evidence of a data breach” at the NFC.

She said it. “We do want to make sure we are driving the conversation and not having someone else on Capitol Hill or somebody else who is less informed tell us what that policy is going to look like.” – Callie Eideberg of the Environmental Defense Fund, a partner in the Food and Agriculture Climate Alliance, which released more than 40 policy proposals in November.