With the economic stimulus bill now signed into law, lawmakers are quickly turning their attention to what could be a much heavier lift: climate and infrastructure legislation.

One thing is clear after the Senate Agriculture Committee held its first hearing on climate policy Thursday: The top Republican on the committee, John Boozman, is far from sold on the idea of carbon markets, which are at the heart of the policy being pushed by farm groups as well as the Biden administration and the committee’s chairwoman, Debbie Stabenow.

In his opening statement, Boozman pressed his concerns that carbon credits won’t benefit farmers significantly enough or broadly enough. “This may be a potential income stream for some producers, which is a good thing. But for others it could be cost prohibitive,” he said.

He also raised concerns that Democrats would use the budget reconciliation process to pass a climate bill with minimal or no Republican support.

Keep in mind: The American Farm Bureau Federation, a founding member of the Food and Agriculture Climate Alliance, has made clear it won’t support a partisan climate bill.

But Stabenow said the hearing was the start of a long process that will consider views from across the ag sector.

New Ag members get their say

Booker, who has proposed major expansions of conservation programs, said that will be important in getting farmers to adopt climate-friendly practices. “These programs are known and trusted by farmers, but they're already vastly oversubscribed, farmers are demanding more for these programs,” Booker said. “And they include practices that have been scientifically tested, as well as ground tested.”

Marshall argues that carbon credits are a service, not a commodity: “We don't trade on services like shingling a house.”

Read more about the hearing here.

Rep. Deb Haaland appears headed to confirmation as interior secretary next week. The Senate voted 54-42 on Thursday to advance her nomination. She picked up four Republican votes.

Take note: Michael Regan was sworn in Thursday as EPA’s 16th administrator. In a statement, he pledged that the agency will “confront climate change, stand up for justice and equity, and ensure science is at the heart of our decision-making.” 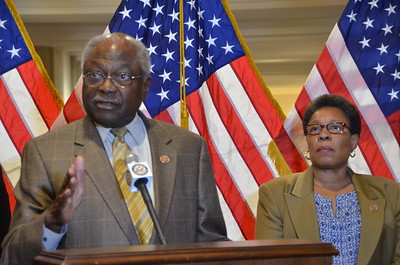 Democrats are laying the groundwork for a huge infusion of funding for rural broadband as part of an infrastructure bill. House and Senate bills introduced Thursday would authorize more than $94 billion to bring high-speed internet service to unserved and underserved areas of the country.

The lead sponsors are House Rural Broadband Task Force Chair Jim Clyburn, D-S.C., and Senate Broadband Caucus Co-Chair Amy Klobuchar, D-Minn. “In 2021, we should be able to bring high-speed internet to every family in America — regardless of their zip code,” Klobuchar said.

Noted: Republican Sen. Josh Hawley, R-Mo., told reporters it would be a “big mistake” if Democrats use the budget reconciliation process to pass an infrastructure bill. But Democrats would have a hard time getting GOP support for tax increases that could pay for the bill.

The World Trade Organization has set the date for its 12th Ministerial Conference on Nov. 29 this year, and the leaders are pushing member countries to come together on significant and attainable reforms such as improving transparency in farm subsidies.

Costa Rica’s Gloria Abraham Peralta, who is heading up WTO ag negotiations, stressed in a meeting this week that she wants to have "a more comprehensive, integrated high-level negotiating phase" this summer in preparation for MC12, according to a Geneva official.

U.S. representatives “asked members to assess priorities … with a realistic attitude and encouraged members to … help build common ground instead of focusing deeper on its own priorities.”

Severe dryness in Argentina is doing significant damage to the country’s soybean crop as farmers prepare to enter the main harvesting month of April, according to John Baize, an analyst for the U.S. Soybean Export Council.

“These beans - the leaves are getting crispy,” said Baize, who noted that the Buenos Aires Stock Exchange and the Rosario Board of Trade in Argentina have both lowered their production forecast estimates. The Buenos Aires Stock Exchange lowered its prediction from 46 million metric tons down to 44 million tons. The Rosario Board of Trade cut its forecast from 49 million to 45 million.

“There’s some chance of some rain next week, but … the damage has been done,” said Baize.

She said it. “Like other commodities, we need to really be careful about the share of that value that goes to the farmer.” Stefanie Smallhouse, president of the Arizona Farm Bureau Federation, telling the Senate Ag Committee that policymakers need to ensure that farmers get a fair share of the value of carbon credits.

She went on, “What ends up happening when you commoditize things is the share that goes to the actual farmer who's doing the bulk of the work gets smaller and smaller.”