More workers and a more diverse food system, including small and medium-sized meatpackers, are necessary for American agriculture to maintain resilience in the face of threats to the system, commenters told USDA as the department embarks on its effort to re-imagine the country’s agricultural supply chains.

USDA asked for input in April, two months after President Joe Biden issued an executive order requiring the department to issue a report by February 2022. The order came in the wake of the impacts of the COVID-19 pandemic, which caused some meatpacking plants to shut down and milk to be dumped by dairy farmers.

USDA has already taken a stab at addressing the problem, committing $4 billion to address supply chain issues, including funding for organic transition and the lack of small meat processing facilities.

“The COVID-19 pandemic led to massive disruption for growers and food workers,” Ag Secretary Tom Vilsack said earlier this month. “It exposed a food system that was rigid, consolidated, and fragile.”

During a comment period that wrapped up last week, many organizations touched on the meat supply and the impact of plants shuttered because of sickened workers, one of the most enduring examples of the pandemic. The government, some said, needs to encourage the establishment of more small and medium-sized operations and allow smaller plants to reach more customers. 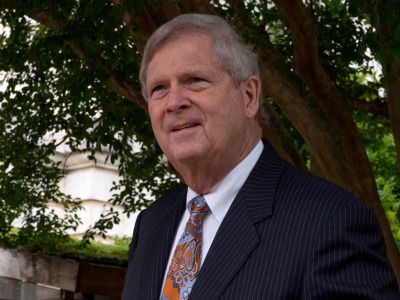 “Looking ahead to future pandemic-like disruptions, significant vulnerabilities remain with a ‘just-in-time’ supply chain and consolidated/centralized meat processing system,” the National Council of Farmer Cooperatives said. “They are still exposed to disease (human and animal) breakouts and are increasingly pressured to implement traceability and automation.”

And the National Cattlemen’s Beef Association said “expanding domestic beef processing capacity is an important mid-to-long-term strategy to improve resiliency in our supply chain,” but noted that the existing infrastructure is being underused.

“Most major meatpackers are not operating plants at 100% throughput capacity. Unfortunately, due to the proprietary nature of firm-by-firm and plant-by-plant efficiency data, the exact number of hooks which are not being utilized is unknown. NCBA urges USDA to examine ways to support the industry in reaching 100% processing capacity utilization.”

The capacity issue also has a bearing on pricing and negotiations, NCBA said.

“To improve producer leverage in fed cattle negotiations, either cattle supplies must be reduced, or processing capacity must be expanded,” NCBA said.

But the North American Meat Institute — which represents packers and processors of beef, pork, lamb, veal and turkey — pushed back against the notion that more capacity is needed to make the system more resilient. It pointed to existing hog and beef production capacity expansions in a few states, facilities the group said were announced "in response to market forces."

“Calls for smaller, ‘regional’ plants as a means to build ‘resiliency’ into the system do not align with sound economic thinking,” NAMI said, citing a Rabobank report that said, “While many have discussed the need for more geographically dispersed, smaller plants, adding packing capacity in the name of supply chain resiliency is unlikely to work. It must be driven by long-run economics.”

Disagreement cropped up in the comments about the success of a Food Safety and Inspection Service program created to allow state-inspected establishments to ship across state lines. NAMI said the calls for legislation to allow those types of shipments ignore the existence of the FSIS Cooperative Interstate Shipping program.

“Nine states have elected to participate in the program, with two of those nine, Iowa and South Dakota, announced during the COVID-19 pandemic,” NAMI said. “CIS was created by Congress as part of the 2008 Farm Bill and ensures product moving in interstate commerce meets the requisite food safety standards. CIS also ensures level playing for companies that wish to sell in interstate commerce.”

But the National Association of State Meat and Food Inspection Directors looked at CIS and came to a different conclusion.

Under USDA’s interpretation of the 2008 farm bill, “any state meat or poultry inspection program must not only be ‘equal to’ federal inspection, but must be carried out identical to federal inspection in each plant in order to sell meat across state lines,” NASMFID said. “As a result, over a decade after FSIS implemented the program, just nine states now participate in the CIS program, and in those states, it is generally a minority of establishments that participate due to the additional administrative burdens placed on both the establishment and the state program.”

The problems meeting demand during the pandemic, the meat industry said, came down to labor. Availability “was affected by employees who became sick or infected, absenteeism caused by fear, and sometimes state or local health agencies,” NAMI said. 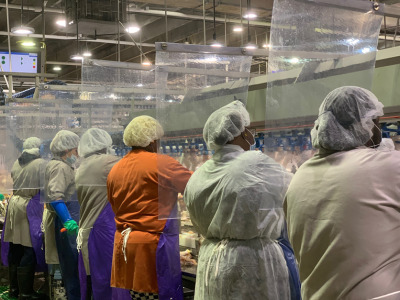 Many packing plants installed barriers between workers during the COVID-19 pandemic. (Photo: Tyson)

“Looking forward, not only does industry need to be better prepared for future pandemics, but to aid the supply chain, USDA and other federal agencies and departments should work in coordination [with] the National Governors Association and organizations representing state legislatures to create a more uniform, consistent response plan at the state and local level.”

“Meatpackers of all sizes face similar operational challenges, the most consistent and severe of which is labor recruitment and retention,” NCBA said, adding the biggest obstacle to entering the market is capital for construction.

“The industry average startup cost for a meat processing facility is roughly $100,000 per hook,” NCBA said, which means a “modest, 25-head-per-day plant would need to secure $2.5 million in financing just to build the infrastructure.” The group called for the passage of legislation “authorizing federally guaranteed, low-interest loans to prospective meatpackers.”

Labor shortages, however, were a recurring theme throughout the comments. The National Grain and Feed Association said a lack of workers “is the largest supply chain constraint facing the grain and feed industry. NGFA members are unable to fill open positions throughout manufacturing, warehousing, and transportation. These shortages are directly impacting our members’ ability to meet consumer demands.”

The labor shortage extends to veterinarians, the Texas Cattle Feeders Association said, a dearth that is due to retirements, a limited number of graduates with a focus on food animals, and the cost of becoming a vet.

Besides meatpacking capacity and widespread concern about labor shortages, commenters touched on a wide variety of other subjects: