Livestock producers across the West and northern Plains are relying heavily on rangeland insurance policies this year, even as the Agriculture Department considers changes to the program that could limit future indemnities for some farmers and ranchers.

The Rainfall Index policies, which can cover annual forage crops as well as rangeland and pasture, are triggered when rainfall at local weather stations falls below the long-term historical average.

Use of the policies has been expanding rapidly, and losses exceeded premiums during 2020. They are on track to do so again in 2021 as drought continues through much of the West and western Plains.

Sales of the Rainfall Index policies have more than doubled since 2018, when producers bought policies covering 98.9 million acres.

In 2020, the policies provided $949 million in indemnities on $726 million in premium. Through April of this year — payments for May and June haven’t been reported yet — indemnities had already topped $506 million, more than half of the $1 billion in annual premium.

“If things continue how they are going, it’s going to be a pretty big loss year,” said Brandon Willis, who served as RMA administrator during the Obama administration and now sells the Rain Index policies in western states while also teaching at Utah State University.

Given the severity of the drought, "it should be a high loss year. It should be a 2012 of the Midwest, if that makes sense," he said, referring to the drought nine years ago that devastated the Corn Belt. 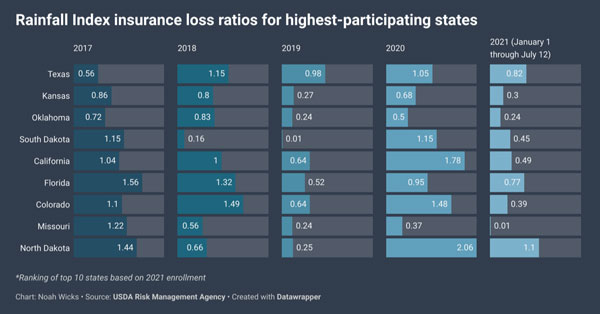 The Rainfall Index policy also is available to beekeepers, who insured forage for 2.2 million colonies this year.

“It’s worth the investment. Let's put it that way,” said Lyle Perman, a South Dakota rancher and licensed insurance agent who sells Rainfall Index policies. “It’s probably not … as good a safety net as I would like to see, but it's the best thing that the government has to offer for us right now.”

Dustin Cox, who raises cattle and brokers hay in Alvin, Utah, is relying on an RI policy this year to cope with the drought. He describes the policy as “rain insurance.”

Cox previously rotated around 80 cows and their calves on six pastures in Northern Arizona and Southern Utah, but planned to sell 20 by the beginning of July due to a shortage of resources. He said if his area doesn't get any rain before September to produce enough feed to sustain his cattle, he'll likely end up selling off more, starting with the oldest and working his way down the line.

"If we don't get the monsoons in Northern Arizona, which we typically get, then we won't be going back to our desert range or winter range," he said. "The grass isn't there."

Producers must decide by Nov. 15 of each year whether to buy Rain Index insurance for the following year. Indemnities are determined based on rainfall during two-month periods. Producers must buy coverage for at least four months of each year.

USDA’s Risk Management Agency has made several tweaks to the program since it debuted as a pilot in 2007 and is considering another overhaul to address concerns that the policies are paying out so frequently that they are being treated more like a new subsidy program. RMA is working on proposed changes based on recommendations made by an outside advisory firm last year.

The report by Sigma Risk and Agricultural Services Ltd. found the program was actuarially sound, but suggested it pays out too frequently in some cases and provides too little coverage in some areas.

The program "frequently pays for shallow losses that are likely not significant financial threats while at times not sufficiently compensating for deep losses that are often a part of widespread droughts driving up replacement forage costs,” the report said.

According to the report, indemnities only exceeded premium during three of the program’s first 13 years, but the frequency of claims “is very high for the PRF plan,” the report said. ”The results indicate that 70-90 percent of policies had a claim.”

The report’s recommendations include dropping the maximum coverage level from 90% to 80% while also adjusting the county forage values, or “county base values,” that are used to calculate indemnities. The county values are supposed to reflect the production value of local rangeland and forage. The report recommends setting minimum CBVs that are no lower than state or county cash rental rates for pastureland.

Willis said RMA has long struggled to set the CBVs properly and several years ago lowered rates in some western areas significantly, provoking an outcry from agents. 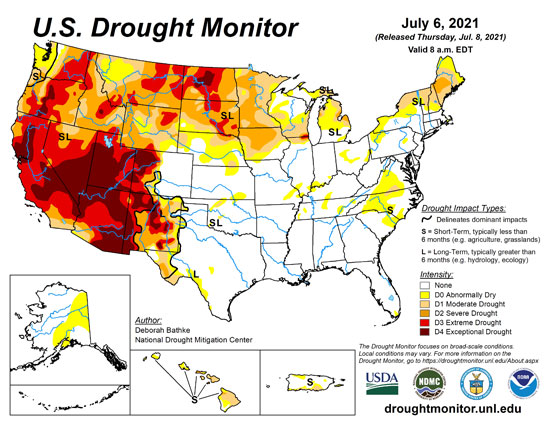 As for the maximum coverage level, Willis can see RMA settling on 85% as the new limit, which would be in line with traditional insurance on row crops. “Do I think you absolutely gut the program by getting rid of 90%? No, I don’t,” he said.

Willis is separately pressing RMA to address a problem that he says has cropped up in some high-elevation areas where the National Oceanic and Atmospheric Administration has installed new weather stations. The newer, higher-elevation stations often record higher levels of precipitation than older stations, often located in towns or airports.

Because rainfall amounts from the new stations are being compared with records from stations that traditionally showed less rainfall on average, producers are less likely to receive indemnities, Willis said.

Acting RMA Administrator Richard Flournoy told Agri-Pulse that there would be no changes in the program for 2022.