The Transportation Department is announcing today that it’s making $450 million in grant funds available this year to expand port capacity, and some of that money may go towards improving the ability of ag exporters to ship commodities to overseas buyers, according to senior government officials.

The deadline for applications for the grant money, funded by the Bipartisan Infrastructure Law and managed through the Transportation Department’s Port Infrastructure Development Program, is May 16, but winners won’t be announced until the fall. Officials stressed to reporters that the program is just as focused on improving conditions for U.S. exports as it is on facilitating imports of consumer goods.

One ag sector representative in a meeting with DOT officials Wednesday says it’s still unclear how helpful port investment plans are so far to exporters of U.S. farm commodities because ocean carriers continue to agree to sending empty containers back to China instead of loading them with ag exports.

The Supreme Court has once again delayed its decision on whether to grant a petition seeking review of California’s animal-housing law, Proposition 12.

The court didn’t issue a decision Tuesday and rescheduled the matter for a conference this Friday. The National Pork Producers Council and American Farm Bureau Federation filed the petition in September.

Friday’s conference will be the fifth time the court has considered the petition, which contends that California’s imposition of housing standards for breeding sows violates the Constitution.

“Proposition 12 makes it a criminal and civil violation to sell pork in California unless the pig it comes from was born to a sow … that was housed with 24 square feet of space and in conditions that allow the sow to turn around freely without touching her enclosure,” the petition says.

Take note: Egg producers also are covered by Prop 12, but companies selling into the state switched to cage-free production to comply with the law.

Among the actions the senators are concerned about: the possibility of a ban on over-the-top uses of dicamba and endangered species evaluations of glyphosate, atrazine and simazine that they say overstate the impacts to wildlife. The senators made their views known in a letter to Regan.

“Input prices for farmers are already skyrocketing. The last thing that farmers need is for EPA to willy-nilly pull the rug out on an essential crop pesticide,” Iowa Republican Chuck Grassley told reporters Tuesday in reference to dicamba. Other senators signing the letter are fellow Republicans Joni Ernst of Iowa, Mike Braun of Indiana, and Roger Marshall of Kansas.

EPA issued a report in December detailing widespread drift damage complaints in 2021. EPA Agriculture Adviser Rod Snyder said last week the agency wants to work with states on “additional mitigations” for the volatile herbicide, which already is subject to a host of application restrictions.

Don’t forget chlorpyrifos: The senators also asked Regan whether the agency would respond to grower objections to EPA’s decision revoking food tolerances for the insecticide. In court papers, the agency said it would do so by next Monday, when those revocations go into effect.

Read more about the chlorpyrifos situation in this week’s Agri-Pulse newsletter. We’ll also look at how the Biden administration is trying to address some farmers’ concerns about participating in carbon markets and sustainability programs. 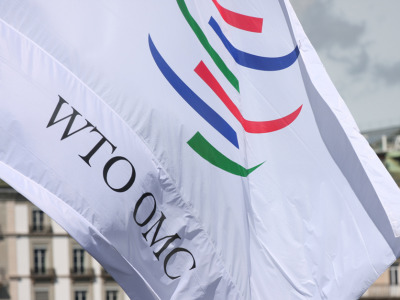 The EU requested “dispute consultations” at the WTO, alleging that China is failing to protect intellectual property rights of European businesses.

IP protections were also at the heart of the U.S.-China trade war that began during the Trump administration, but the U.S. did not take its complaints to the WTO. Instead, the U.S. slapped Section 301 tariffs on Chinese goods, spurring Beijing to hit U.S. farm goods with retaliatory tariffs.

Senate looks to fill out CFTC

The Senate Agriculture Committee is moving to provide some help to Rostin Behnam, the chairman of the Commodity Futures Trading Commission. The committee has scheduled a confirmation hearing next week for four nominees: Christy Goldsmith Romero, Kristin Johnson, Summer Kristine Mersinger and Caroline Pham.

CFTC normally has five members but currently has only two, and one of those is Dawn Stump, a former Senate Agriculture Committee aide whose term ends in April. She didn’t seek a new, five-year term.

Confirmation of the four nominees would restore the commission to five members after Stump leaves.

Iowa Gov. Kim Reynolds has been selected to give the Republican response to President Biden’s state of the union message next Tuesday.

Why it matters: This is her tryout on the national stage. Reynolds is considered a possible running mate for Donald Trump, should he run for president again in 2024.

Federal agency purchases of bio-based products that are approved under USDA’s BioPreferred have failed to increase “despite significant product innovations,” the senators write.

They urged USDA and the Office of Management and Budget to “educate procurement officers on the benefits of BioPreferred products and routinely measure the progress of the program.” The senators also are asking the administration to speed the development of product codes for bio-based items.