Organizations representing wheat, corn, soybeans and sorghum will wait until this summer before finalizing policies for the next farm bill. That’s the word from Chandler Goule, CEO of the National Association of Wheat Growers.

Interviewed for Agri-Pulse Newsmakers, Goule said the groups are waiting to get a read on the priorities of the leaders of the House and Senate Ag Committees. Goule says the grain and soy organizations also need time to “see what other groups are saying, so we can see where we need to put the most emphasis.”

Members of the grain and soy groups will meet next week in New Orleans at the annual Commodity Classic.

Watch this week’s episode of Newsmakers. Goule and top experts on ag trade also discuss the impact of the Russian invasion of Ukraine.

By the way: Wheat prices continued their relentless rise on Thursday. Kansas City hard red winter wheat futures were up the 75-cent daily limit again to $11.50 a bushel.

A spokesperson for USDA says there are “no immediate discussions” at the department about opening the Conservation Reserve Program for cropping because of the Ukraine crisis.

Earlier on Thursday, Farm Service Agency Administrator Zach Ducheneaux told reporters: “We keep an eye on world events. We do understand that there's a significant portion of the Conservation Reserve Program that's aimed at reserve and production.”

Joe Glauber, a former chief economist at USDA, doesn’t think that allowing emergency planting of CRP acreage would have a major impact on global wheat supplies, at least this year.

In a series of tweets, Glauber notes that “much of the land in the CRP is marginal, less productive land so yields would likely not be nearly as large as the historical yields that we saw in 2018-20.”

Fed chair: Consolidation may be ripe for antitrust scrutiny

But Powell added, “Industry by industry, there will be cases in which there are competition issues. And those are certainly an appropriate subject for … antitrust scrutiny.”

Take note: Tester and two Republican colleagues, Charles Grassley of Iowa and Mike Rounds of South Dakota, introduced legislation last year to create an "Office of the Special Investigator for Competition Matters" within USDA’s Packers and Stockyards Division. The bill has 12 co-sponsors.

The Senate Commerce Committee deadlocked 14-14 Thursday on the nomination of Gigi Sohn to the Federal Communications Commission. 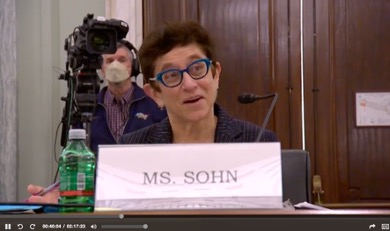 Sohn has questioned the benefit of past spending for rural broadband expansion. And ahead of the committee vote, Sen. John Thune, R-S.D., entered into the record a web post by former Democratic Sen. Heidi Heitkamp that said Sohn has a “deeply cynical view of rural broadband efforts.”

Sohn has faced fierce opposition from Republicans and top trade groups including the U.S. Chamber of Commerce, so Democrats will likely have to stay united to get her confirmed. Democrats delayed her nomination after New Mexico Sen. Ben Ray Lujan suffered a stroke. He returned to the Senate Thursday.

Cantwell: Senate could vote on OSRA by next week

The Senate’s Ocean Shipping Reform Act could see a vote by “next week, if we can get there,” the chairwoman of the Senate Commerce Committee told reporters after a hearing on the bill Thursday.

Sen. Maria Cantwell, D-Wash., said she has spoken with the sponsor of the House-passed version of the bill — California Democratic Rep. John Garamendi — about the issue, but that they didn’t get into details about the legislation.

The Canadian government finally made public its proposals to fix its dairy quota system in response to a USMCA dispute panel ruling, and the U.S. dairy industry is not impressed.

Becky Rasdall, vice president for trade policy and international affairs at the International Dairy Foods Association, tells Agri-Pulse: “The Canadian proposal is a non-starter. The proposal makes true access to the Canadian market unattainable through a series of gimmicks.”

A spokesman for the U.S. Trade Representative stressed to Agri-Pulse that the Biden administration hasn’t approved the Canadian proposal.

Keep in mind: The Canadian government says it believes the December UMCA panel decision was a partial win because it confirmed Canada’s right to operate a supply management system for its dairy industry. U.S. industry sources brush that off, saying that wasn’t the issue at stake.

US registers big week for soybean sales to China

The latest USDA trade data for the week of Feb. 18-24 shows export sales of 1.386 million metric tons of soybeans for delivery in the 2022-23 marketing year. Most or all of it will be shipped to China. USDA reported sales of 1.26 million tons to China and 126,000 tons to “unknown destinations,” which may also be China.

He said it.  "We get inflated prices, we get downtime during tight harvest planting windows, and that's not fair. That hurts farmers’ and ranchers' bottom lines.” - Aaron Shier of the National Farmers Union, talking to Agri-Pulse about a petition filed with the Federal Trade Commission on John Deere’s repair policies. Deere declined comment on the FTC complaint.