Home » With grant dollars pouring in, California eyes the future of cutting emissions in agriculture
WEST

With grant dollars pouring in, California eyes the future of cutting emissions in agriculture

California has led the world in pledging to reduce methane emissions. That mandate, combined with incentive grants, has created a new industry for capturing biogas from dairies and converting it into natural gas to power farms and sell into the pipeline. Now the state and industry players are looking to build on California’s most cost-effective program for reducing emissions by investing in the next groundbreaking technologies and innovative practices.

New grant funding is powering those solutions. The Biden administration is pouring $2.8 billion into pilot projects in every state, with California agriculture benefiting the most—at nearly $800 million in climate-smart grants.

Among the projects, the California Dairy Research Foundation is leading an $85 million project. At a press event Monday, Executive Director Denise Mullinax said the foundation is already engaging universities to launch fundamental new research using the grant dollars. One idea is vermifiltration, using earthworms to speed up the decomposition process and boost soil filtration for manure effluent. Other research is applying algae “raceway ponds” as a flush treatment for effluent. The scientists will be able to gather more information on the greenhouse gas reduction and nitrogen movement through the system.

The research will, in turn, provide valuable information for updating the standards of practice that guide the USDA Natural Resources Conservation Service.

“We have a really strong research team here in California,” said Mullinax, adding that little is known on these areas of potential discovery.

The project will also analyze the industry’s messaging to consumers on the value of climate-smart practices, which would benefit the whole supply chain in making the case for these investments, according to Mullinax. CDFA Secretary Karen Ross added that it would help companies along the chain to quantify and verify climate efforts as they look to report Scope 3 emissions and to “figure out what this product stands for when it's sitting on the shelf.” 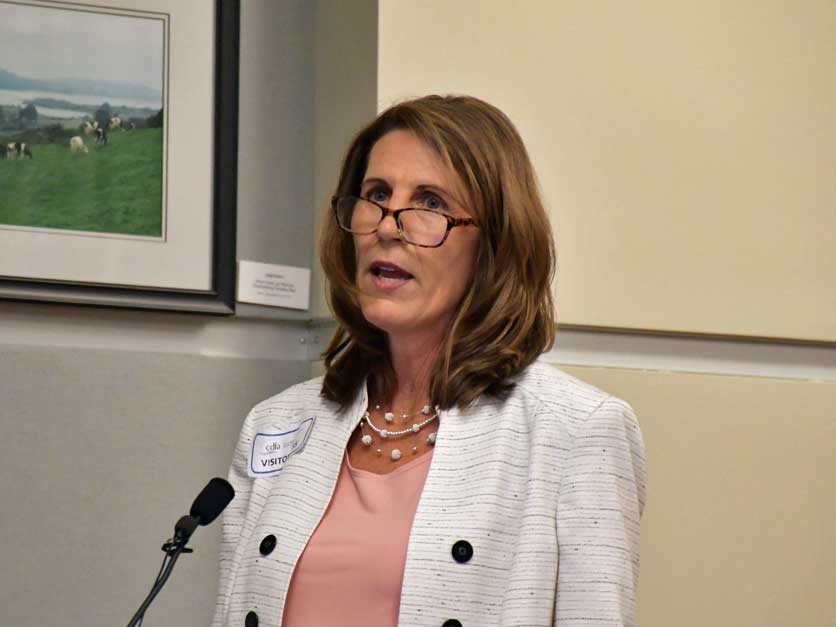 The research builds on the state’s success with anaerobic dairy digesters and manure management practices.

The Newsom administration is also taking steps to tackle enteric emissions from cow digestion. A budget trailer bill approved this month allocates $10 million for supplementing livestock feed with additives or ingredients like seaweed. The program will develop demonstration projects on the potential for reducing enteric methane from cow burps as well as research into dietary modifications.

The state has allocated more than $300 million into grants for reducing methane emissions from livestock, largely paid for through cap-and-trade revenues. Most of that money has gone to dairy digesters, seizing an opportunity for emerging technologies that benefit from milking facilities already concentrating cows and their emissions under one roof.

The program is one of several housed at CDFA and the Air Resources Board (CARB) for incentivizing climate-smart agricultural practices. Ross launched her flagship initiative, the Healthy Soils Program (HSP), in 2014 under the Brown administration. The department was scaling back up after the Great Recession led to a sweeping 30% cut in agency budgets across the administration.

Before CDFA, Ross served as chief of staff for USDA Secretary Tom Vilsack as he began shaping his climate strategy in 2008. Over two terms in the Obama administration, Vilsack and NRCS established “the building blocks of climate-smart agriculture,” according to Ross.

HSP served as a test run in working with industry to establish new practices built on voluntary practices, incentive dollars and on-farm demonstration projects, which set the groundwork for larger public and private investments into digesters.

“Who better to solve this than those people who own the land?” said USDA NRCS Chief Terry Cosby. “This partnership [with the California Dairy Research Foundation] is going to be looking at how we develop new technology, how we develop new innovations, what actually works.”

Industry leaders weigh in on the future of California agriculture
Is California falling behind in cutting dairy emissions? CARB is winding up its regulatory gears just in case
What defines a small farm in California? It's complicated—but critical to agriculture’s future

Mullinax stressed that California has already put a considerable amount of time and effort into understanding methane issues in agriculture.

“Our producers really have a track record of being innovative, of being leaders in the industry,” she said. “This project really will build on that past success.”

The funding comes at a critical time, as CARB updates California’s AB 32 Climate Scoping Plan, which sets the state’s strategy for a broad array of climate policies. After CARB released a draft of the update in May, Gov. Gavin Newsom ordered the agency back to the drawing table to revise the plan yet again to adopt more ambitious goals. At the governor’s behest, the Legislature passed a series of last-minute climate bills that add aggressive new goals for carbon neutrality, capturing emissions and sequestering carbon on natural and working lands.

Agriculture is racing to add more input to the process as well. According to Dairy Cares Executive Director Michael Boccadoro, “we're well on our way to achieving” a 40% reduction in methane emissions.

“The analysis is being done as we speak,” said Boccadoro. “We'll get there.”

A team of UC Davis researchers is updating CARB’s assessment of the state’s methane reductions, factoring in more recent incentive funding along with projects currently under construction and industry initiatives that have not tapped into state funding, according to Boccadoro. New insights over just the past week have raised the score for how much California benefits from alternative manure management practices.

And Newsom has been touting the state’s progress on its greenhouse gas reduction goals. Last year, the governor and several cabinet members traveled to the United Nations Climate Conference in Scotland to promote California’s methane pledge as several countries considered similar actions. This week Newsom is in New York City for the Clinton Global Initiative annual meeting on climate action to promote a new $54 billion climate budget.

“We have not just set forth the most audacious goals, we have backed up those goals with regulation and laws [and the climate budget],” he told the audience when opening the conference on Tuesday.

But such funding is limited. A recession is creeping closer to reality, with the state drawing 11% less tax revenue this year and stock markets indicating a downturn is likely on the horizon. Newsom has been tightening the purse strings since his initial budget proposal in January by limiting incentives programs to a one-time basis, rather than as ongoing funding, and more recently by vetoing bills viewed as adding unnecessary costs to the state.

This builds even more pressure for the money now flowing into emissions reduction programs and places more scrutiny on the value the state is getting from those investments.