Farmers and ranchers who bought crop insurance across the Plains and West are finding that it’s going to make a big difference to their bottom lines due to the drought that plagued the region through the growing season.

Signup for the relatively new Rain Index insurance policy, which triggers indemnities on pasture, rangeland and forage when precipitation in the producer’s area is below normal, soared to 253 million acres this year, up from 205 million last year and 161 million in 2020.

The RI policy, which debuted as a pilot program in 2007, has paid $1.6 billion in indemnities to producers so far on less than $1.4 billion in premiums, more than half of which were paid by the government. It's the third straight year that losses have exceeded premiums.

In Texas, which suffered one of its worst droughts in a decade this year, producers  who bought RI insurance on 38.2 million acres of rangeland and forage have claimed $714 million in indemnities. In July 57% of the state was classified as in extreme or exceptional drought.

Texas cotton growers, who also watched their prices collapse even as crops dried up, are also likely to see significant indemnities this year through their Revenue Protection policies and supplemental coverage.

The administrator of USDA’s Risk Management Agency, Marcia Bunger, said the Rainfall Index program has grown “exponentially” in the last five years and said the policy’s “simplicity makes it fairly straightforward for the producer.”

She expects the program to continue growing and has rejected some reforms recommended by a group of consultants during the Trump administration in 2020 aimed in part at limiting indemnities. Bunger cited concerns the reforms would have reduced participation.

“We are moving forward with the status quo and we won't be implementing at this point any of those recommendations found in the study,” she said.

The report recommended dropping the maximum coverage level from 90% to 80% while also adjusting the county forage values, or “county base values,” that are used to calculate indemnities.

Brandon Willis, a former RMA administrator who has sold RI policies in western states, said the insurance “has been extremely effective the past few years and has been keeping guys in business out West.” He doesn’t think enrollment in the West will continue to grow as fast as it has in recent years, but thinks national participation could eventually be double this year’s.

The total RI indemnities paid this year won't be known until early 2023, according to RMA. Producers select coverage for the pasture, rangeland and forage policy (PRF) in two-month intervals, and the last coverage period for 2022 is November-December.

Dec. 1 is the signup deadline for 2023 Rainfall Index insurance.

A Rainfall Index policy also is available to beekeepers, who insured forage for 2.7 million colonies this year and have received $91 million in indemnities.

Cotton growers, meanwhile, bought up a supplemental insurance policy in the spring amid a surge in market prices and they are going to be glad they did. 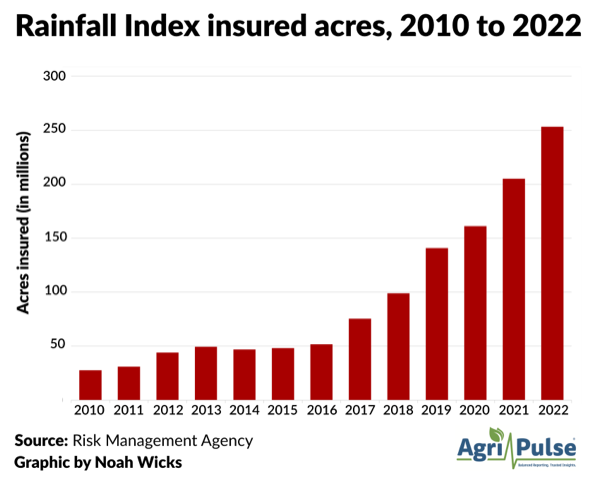 STAX, and similar policies available for other crops, including the Supplemental Coverage Option, are designed to enable farmers to lower their deductibles and insure against “shallow” losses not covered by their underlying Revenue Protection policies. STAX is the most lucrative of the supplemental policies and allows farmers to insure up to 90% of their county’s expected revenue, with the government picking up 80% of the premium.

Most cotton farmers insured their crop based on a price of $1.02 to $1.03 a pound - USDA sets the insurance prices early in the year. But market prices started falling in May, then nosedived in June and are now running under 80 cents a pound.

RMA hasn't reported any STAX indemnities yet, but they are likely to be substantial.

“The dive in prices will certainly trigger a price-based indemnity that is beneficial to producers … but given the size of crop losses in TX this year, the real benefit is to the grower that is facing a total crop failure,” Texas A&M University economist Bart Fischer said in an email to Agri-Pulse.

Next year will pose a different challenge for growers if prices remain down, he said.

“If we don’t see a rebound, producers are still going to need to focus on squeezing out all of the protection they can (including looking at STAX).  But, at those sort of prices, producers are below break-even (and they really start looking to Title 1 for more robust protection),” he said, referring to the Price Loss Coverage program in the farm bill.

The problem for growers is that the PLC reference price isn’t high enough to help producers much when input costs are up sharply, he said.

For example, a 2023 market price of 76 cents a pound would be too high to trigger a PLC payment, but producers who buy Revenue Protection insurance and supplement it with STAX would have just 68 cents per pound in coverage, or 90% of the market price. That would be “far below break-even for a lot of growers,” Fischer said.