WASHINGTON, May 3, 2017 - After only a week in office and without a subcabinet in place, Agriculture Secretary Sonny Perdue is moving forward on projects like mapping out what the Trump administration can do to improve rural infrastructure across the country and preparing to help renegotiate the North American Free Trade Agreement. 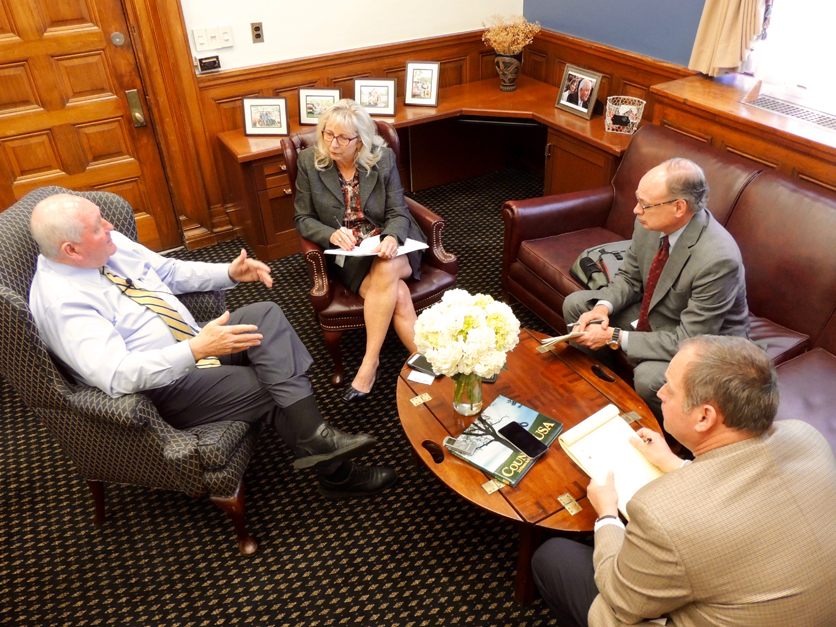 Perdue, who sat down with Agri-Pulse today in his office at USDA headquarters, said USDA plans to play a significant role in President Donald Trump’s $1 trillion infrastructure plan, starting with making sure that even the remotest rural communities have high-speed access to the Internet.

“Obviously, you know that broadband has become the new roads and sewers … of this century and one of the things in production agriculture that they’re using is connectivity,” Perdue said.

USDA has staff tasked to accessing ways to invest in improving rural infrastructure like broadband Internet access, an issue that’s a priority for groups like the American Farm Bureau Federation.

“Current and future generations of rural Americans will be left behind their fellow citizens if they are without affordable high-speed broadband service that enables them to tap into health care and educational services, government agencies, and new business opportunities,” the group says in a fact sheet.

But improving high speed Internet access in areas often too sparsely populated to get the attention that voice and data companies provide for more urban areas is also key to keeping younger generations on the farm.

“Frankly, from a more social standpoint, it’s going to be hard to keep good, smart kids on the farm if they can’t access (the Internet) on their smart phones …,” Perdue said. “There’s a great motivation behind (better Internet), not only from a productive capacity, but for the future of sociological assimilation or rural areas.”

The average age of a principal farm operator is about 58 years old, according to the most recent Census of Agriculture completes in 2012 by the USDA’s National Agricultural Statistics Service.

Perdue didn’t give a deadline for when the USDA infrastructure proposal would be turned into the White House, but Trump said in a CBS interview that aired Monday that the nation-wide plan is near completion and could be rolled out publicly in the next few weeks

"We're going to do infrastructure very quickly,” Trump said in the interview. “We've got the plan largely completed, and we'll be filing over the next two or three weeks, maybe sooner."

Beyond infrastructure, Perdue is taking a lead role in protecting agricultural interests as the Trump administration moves forward with a renegotiation of NAFTA. In fact, the new agriculture secretary said he’s already planning trips to Canada and Mexico.

“We’ll be going, obviously, as we renegotiate NAFTA and we’re going to Canada and Mexico and all places in between in order to make sure that we get a good deal for American producers,” Perdue said.

Of course there might not be any renegotiation if not for the intervention of Perdue. Trump was still on the fence about whether or not he was going to pull the U.S. out of the three-country trade pact that’s credited with massively boosting U.S. exports of corn, soybeans, rice, pork, dairy and beef.

It was Commerce Secretary Wilbur Ross that told Perdue last week that Trump was seriously considering a withdrawal from NAFTA.

“He asked me what the impact on U.S. agriculture would be if we withdrew from NAFTA … and I said it would be very devastating and I’d love the opportunity to communicate that (to Trump),” Perdue said.

It wasn’t much later that Perdue was in the White House, showing Trump on a map all of the states that would suffer if, for example, Mexico reinstated tariffs on U.S. farm goods. Many of those agricultural states helped Trump collect the electoral points needed to defeat Hillary Clinton in the November election.

“I think like any good leader, (Trump) listens to a lot of advice and counsel and he made the decision that the word ‘withdraw’ or ‘terminate’ would be toxic to the markets and determined that he would love to see (NAFTA) work for the betterment of all three nations,” Perdue said.

Perdue also said in the interview that he is concentrating on helping farmers cut through regulatory red tape at USDA and elsewhere in the government.

Last week, President Trump asked the USDA secretary to chair an interagency task force identifying regulations and barriers to rural and agricultural prosperity. Perdue has pledged that some “regulatory rollbacks” will be forthcoming soon.

But it’s not clear which, if any USDA regulations will be repealed.

“Many of the regulatory issues that are sometimes very onerous to our farmers are not issued by USDA but other agencies like EPA, Labor, and FDA. What that says to me is that agriculture is going to have a seat at the table,” as any regulations are considered, Perdue told Agri-Pulse. Ideally, those upfront communications with other agencies will prevent the need to do “damage control on the back end.”

In general, Perdue said that, under the Trump Administration, there will be more interagency cooperation with a more “holistic approach to governing rather than being siloed in different agencies.

“We are already about the business of developing personal relationships and communications - principal to principal,” Perdue said, describing discussions with other cabinet members.

“Often times in this city, the principals never talk. It’s just the staffs that talk,” Perdue said. But under Trump’s “One America” approach to governing, he expects principals will be deciding and then communicating to staff.

On another issue, Perdue said the failure of Congress to include aid for cotton and dairy assistance in the fiscal 2017 budget agreement means that he’ll be asked to do something administratively. “We know that by and large the 2014 farm bill was very progressive, very successful, maybe except for those two areas,” Perdue said.

The budget deal includes language urging Perdue to consider using his Commodity Credit Corp. authority to assist dairy producers, presumably through purchases of cheese or other dairy products. The cotton industry is expected to be asked him to make cottonseed eligible for the Price Loss Coverage as an “other oilseed.”

Perdue’s predecessor, Tom Vilsack, said he didn’t legal authority to address the cottonseed issue, and Perdue suggested that the cost could be concern as well. “I could fix it but we’ve got some budget constraints,” Perdue said. Budget Director Mick Mulvaney would likely have to sign off on any actions that Perdue takes that increase spending.

When Vilsack was considering the idea, the USDA estimated internally that deeming cottonseed as an “other oilseed” would cost about $1 billion a year.

Perdue also noted that there are lawmakers who “want to link the dairy solution and the cottonseed issue. The ball is in our court and we’re going to look at those issues and see if we can make good recommendations on how to fix that in the 2018 farm bill,” he said.

The top Democrat on the Senate Agriculture Committee, Debbie Stabenow of Michigan, argued that the cotton and dairy issues should be dealt with together during the farm bill debate.

(Phil Brasher and Sara Wyant contributed to this report.)