Farmers across the Corn Belt and northern Plains along with producers in California, western Texas, and the lower Mississippi River Valley have been the biggest beneficiaries of the Trump administration’s Market Facilitation Program over the past year, according to data obtained by Agri-Pulse and reflecting payments as of Feb. 19, 2020.

Lubbock County, Texas, the hub of one of the world’s largest cotton growing regions, received more money than any other county, $47.2 million, according to the Agriculture Department data. That total includes all three tranches of the $14.3 billion in MFP payments that were made for the 2019 crop year. The final round of payments went out earlier this month.

Mississippi County, Ark., a soybean-growing area that abuts the Mississippi River and the Missouri Bootheel, is a close second at $47.1 million.

Tulare County, Calif., a sprawling dairy region that also produces almonds, table grapes and other crops that qualified for 2019 MFP payments, is No. 3 at $46.8 million.

But the payments were also widely distributed across the Midwest and Plains states. Iowa, which received $1.58 billion in total payments, the most of any state, and Illinois, have eight counties between them that ranked in the top 20 in MFP money. McLean County, Ill. ranks fourth in the nation in payments by county at $46.8 million. Sioux County, Iowa is sixth at $42.9 million.

Illinois is a close second to Iowa in total payments at $1.45 billion. Texas is third at $1.071, narrowly ahead of Minnesota at $1.065 billion. Kansas, which received $1.01 billion, is the only other state to receive more than $1 billion.

The 2019 payments “were welcome for many struggling farmers including myself,” but they “do nothing to alleviate the long-term consequences of the trade war,” Tim Dufault a wheat and soy farmer from Polk County, Minn., says in testimony prepared for the House Ways and Means Committee on Wednesday. Polk County received $37.5 million.

“While we are being paid not to sell to one of the fastest growing markets in the world, our competitors are filling the void. Our loss is Canada, Brazil, Russia and Australia’s gain. For example, in the past two years, Canada’s wheat exports to China have increased 400% while ours have fallen,” he said.

A third version of MFP could be coming this year. In a tweet that surprised Agriculture Department officials, President Donald Trump announced that he may provide additional assistance to farmers this year "until such time as the trade deals with China, Mexico, Canada and others fully kick in.”

Trump didn’t say how the aid would be provided, and USDA officials say they have not been asked to prepare for a new round. 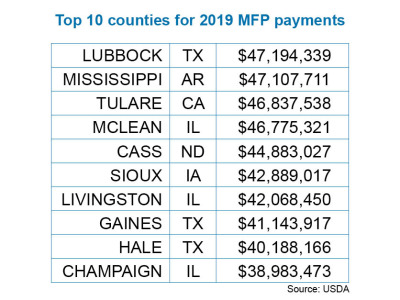 Some lawmakers think a new round of MFP is inevitable given that Trump is up for reelection. Twenty states accounted for more than 90% of the total MFP payments distributed nationwide, and Trump carried all but three of those states (California, Illinois and Minnesota) in 2016.

Zippy Duvall, president of the American Farm Bureau Federation, says it’s no surprise that Trump would raise the possibility of more MFP payments given the impact of the coronavirus outbreak and the dampened expectations for China to fulfill its import pledges under the “phase one” trade agreement.

“It’s kind of expected that the farmer is going to continue to hurt, and this president’s always said he’d stand beside them,” said Duvall.

For most crops, including corn, soybeans, cotton, wheat, peanuts and rice, the MFP payments for the 2019 crop year are based on rates that USDA assigned to each county based on a calculation of the impact of trade barriers to U.S. exports of each eligible commodity since 2009, including the retaliatory tariffs China imposed in 2018.

The rates ranged from $15 to $150 per acre nationwide, with the highest rates going to cotton-producing counties. Payments were then made to farmers based on their planted acreage of total eligible crops.

Lubbock County, which produces about 416,000 acres of cotton, according to the 2017 agricultural census, had one of the highest payment rates in the nation at $145 per acre. The rate in Mississippi County, Ark., was $122. The rate in McLean County, Ill., was $82 an acre.

Payments were made at different rates for two livestock products, milk and pork, and for some specialty crops, including almonds, cranberries, fresh grapes, fresh sweet cherries, hazelnuts, macadamia nuts, pecans, pistachios, and walnuts.

Coronavirus Food Assistance Program: Where did the money go?
Daybreak May 6: Where's the beef? Shortage hits chain with iconic slogan
Top 100: Breaking down the top states and counties in 2019 MFP payments

USDA Chief Economist Rob Johansson said the rates were designed to "reflect the cost of the (tariff) damages to the producers. Counties that had produced a lot of commodities that were traded with China, that were affected by the tariffs, were the ones that got the largest payments."

Producers who farm in multiple counties received payments based on the individual rates in each county. But the USDA data obtained by Agri-Pulse assign all of a producer’s payments to the county in which he or she is based, known as his or her “recording county,” not the counties on which the payments are made.

For example, a cotton grower or landowner who has a home or office in Lubbock could receive payments for acreage in neighboring Hale County ($114 payment rate) or Lynn County ($124 payment rate) but all of the payments would appear under Lubbock County, the producer’s recording county.

San Joaquin County, Calif., received the most money for specialty crops at $21.2 million, followed by Fresno County at $19.8 million, Tulare at $15.7 million, Kern County at $13.6 million and Stanislaus County at $13 million.

California and Iowa had the top ranking counties for MFP payments when it came to milk and hogs, which were compensated at rates of 20 cents per hundredweight on milk and $11 per head for hogs. 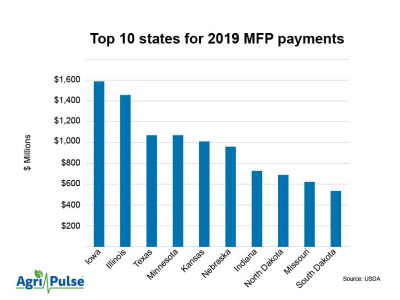 Some economists have suggested that the payment rates overcompensated producers for the damage from Trump’s trade war with China and other barriers. But Scott Irwin, an economist at the University of Illinois, said the rates were reasonable, given the impact the trade disruptions continue to have.

Soybean growers were hurt, he said, not just by the drop in prices when the tariff war with China began in 2018, but they also will be hurt by long-term disruptions in trade, Irwin said. And he argues that the trade war depressed the local prices, or “basis,” for soybeans leaving growers without the coverage they expected from the futures market or their crop insurance revenue policies.

He praised USDA for assigning a single payment rate to each county because it avoided inducing farmers to plant one crops over another. “Under the circumstances the USDA did pretty well with the 2019 MFP,” he said.

Other critics have complained that the 2019 MFP didn’t help producers hurt by non-tariff trade barriers.

The Government Accountability Office, which is the investigative arm of Congress, and USDA’s inspector general are conducing separate investigations of MFP.

AFBF's Duvall says the program was made about as fair as it could be. “You won’t have a perfect system,” said Duvall, whose home county in Georgia, Greene, received $35,000, according to the USDA data.