The Agriculture Department is promising to deliver $700 million in delayed pandemic aid to biofuel producers by this summer, and the money will be especially welcome should soaring gas prices dampen ethanol demand.

USDA officials told the House Agriculture Committee on Tuesday that the $700 million in payments were held up by the need to reconsider rules for the program, which was first announced in January.

“We’ve been working to get the money out the door. We took some time to get it right,” Xochitl Torres Small, USDA’s undersecretary for rural development, told the committee.

Karama Neal, administrator of USDA’s Rural Business-Cooperative Service, said the program was revised to ensure that additional companies could get assistance, including those that had kept producing ethanol at a loss during the pandemic to fulfill contracts for supplying distillers grains and other products. 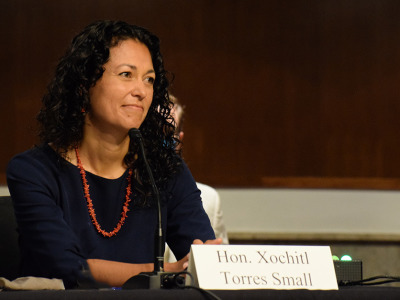 Torres Small said the payments should be distributed by late spring and early summer. She said the department would also announce a third round of assistance for the installation of ethanol blender pumps and other biofuel infrastructure.

The promises of new aid come as lawmakers are pushing the Biden administration to issue summertime Reid vapor pressure waivers that would allow the year-round sale of E15. Some Republicans called for both increased oil production as well as approval for year-round E15 sales.

High fuel prices are the “biggest thing that's driving inflation and increasing the overall cost of things,” said Rep. Tracey Mann, R-Kan. “The answer is right under our feet here in America and it's also growing on our fields. It's all over the country today.”

Torres Small repeatedly deflected pressure from Republicans to state the administration’s position on E15. She noted that the decision is the Environmental Protection Agency's to make and that USDA’s main role is to fund biofuel infrastructure.

Although the White House has confirmed that year-round E15 approval is an option being considered, it may be too close to the summer driving season for the action to have much impact on E15 sales and ethanol demand this year.

Scott Irwin, an economist at the University of Illinois, also believes high fuel prices are likely to depress gasoline demand and ethanol consumption. He notes that gasoline consumption has trended lower this year as gasoline prices have risen.

According to the Energy Information Administration, motorists used 8.5 million barrels of gasoline for the week that ended March 25, down from nearly 8.7 million for the comparable week in 2021. It was also the lowest consumption since the week of Jan. 28.

“If we drop crude oil use … we’re going to drop ethanol use,” said Irwin.

Approval for year-round E15 would provide some additional benefit, but the impact will be muted, Irwin believes. That’s in part because there are many state regulations still limiting E15 usage, he said.

“If you doubled that in a year … it would certainly matter to the ethanol industry. It’s still a very small part of the overall gasoline picture,” he said.

Exports are one bright spot for the industry. U.S. ethanol exports rose 16% in February and were 41% higher than the year earlier, the Renewable Fuels Association reported Tuesday.

The Trump administration approved the year-round sale of E15, but the decision was struck down in the courts.

Sen. Chuck Grassley, R-Iowa, told reporters it would be nearly impossible for Congress to act on the E15 issue, citing an "anti-ethanol" attitude that he said was prevalent among lawmakers.

"That's why I'm surprised that the Biden administration is doing it. And if he (Biden) can do it by executive order, or by regulation, or guidance, however, he wants to do it, that's the fastest way to get it done," Grassley said.

For more news, go to Agri-Pulse.com