As California suffered a record heat wave in September and low reservoir levels hampered hydroelectric production, the Department of Water Resources (DWR) turned to diesel generators to bolster the fragile energy grid. That upset progressive lawmakers and environmentalists, who decried it as a step backward on the state’s clean energy transition. And it drew skepticism over the state’s plan to transition to 100% renewable power by 2045 while generating more energy to power a massive conversion to electric vehicles.

This month lawmakers brought the state’s energy regulators to the Capitol to press them for details on any near-term solutions that could shore up the grid without relying on fossil fuels or nuclear power. Trade groups, however, are drawing attention to the state’s soaring utility rates and faulty reliability, especially in rural regions, and pushed the committees to seek out funding sources other than ratepayers.

“There was a significant amount of concern in the Legislature, as we were looking at the emergency energy supply, that there was an overreliance on fossil fuel,” said Assembly Budget Chair Phil Ting of San Francisco, in opening the discussion. “It seemed odd to retreat to fossil fuels and to use that as a crutch, when we are the center of the green and clean energy revolution.”

The joint budget and policy committee hearing was the second this year to examine the administration’s efforts to maintain grid reliability over the summer. In August the lawmakers scrutinized Gov. Gavin Newsom’s last-minute actions to extend the life of the Diablo Canyon nuclear power plant and several natural gas plants.

Starting in 2020 the state mandated that renewable resources make up 33% of the energy portfolio for utilities. That percentage will nearly double in 2030 and must make up the total portfolio by 2045. It coincides with a ban on the sale of new gas-powered cars by 2035 and on the sale of diesel-powered medium- and heavy-duty trucks by potentially the same year. Yet extreme heat waves and wildfires during the last three summers have led to tight supply conditions for the state’s energy grid and rotating outages or near misses.

The Legislature has allocated more than $1 billion to accelerate the deployment of clean energy resources to smooth the transition, while the Biden administration on Monday granted about the same amount to Pacific Gas and Electric (PG&E) to keep the Diablo Canyon nuclear power plant open. While environmental groups shared their frustration, Newsom thanked the administration for the investment but stressed the extension is for a limited term and reasoned that it will provide “an onramp for more clean energy projects to come online.” 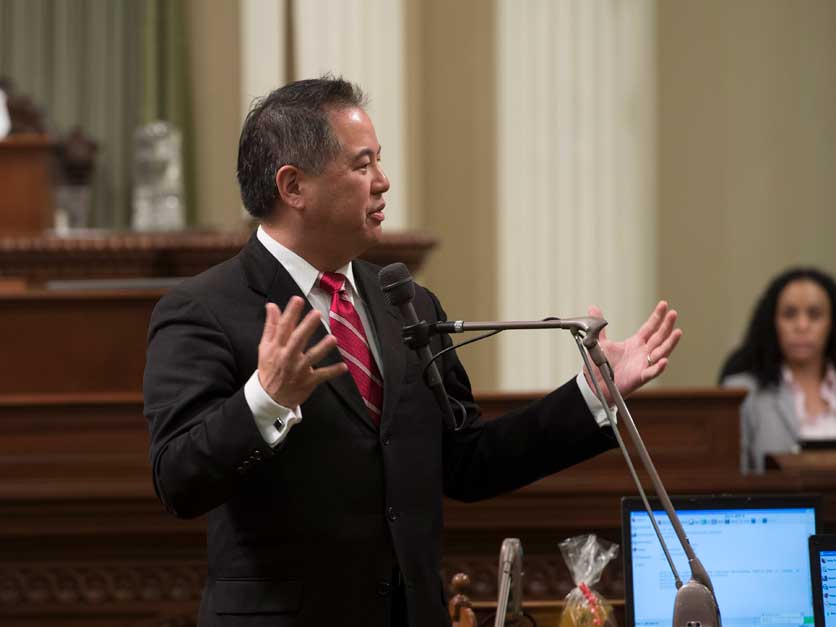 The decision to keep the nuclear power plant open aligned with the priorities of Republican Assemblymember Vince Fong of Bakersfield. In the hearing, he described Kern County as California’s energy capital, producing 70% of the oil in the state, 76% of its gas and 60% of the renewable energy. It is also the top-grossing county in the nation for agriculture.

“We're going to have to look at all sources of energy production to keep the lights on,” said Fong. “When we talk about reliability and affordability, those are real issues that we have to address.”

He argued the state’s strategy has been to place “more and more stress and responsibility on the customer.”

Speaking on behalf of California’s customers, Matt Freedman, a staff attorney with the consumer advocacy group The Utility Reform Network (TURN), warned of “the emerging crisis of affordability.”

“The Legislature needs to recognize that successfully executing this transition [to carbon neutrality] is going to require a whole series of near-term actions to navigate a variety of challenges that lay ahead,” said Freedman, who decried skyrocketing electricity rates and delays for clean energy projects to come online.

Residential rates for PG&E and San Diego Gas & Electric have shot up nearly 50% in the last five years, and the California Public Utilities Commission projects they will continue to rise about 9% every year, which Freedman said is likely an underestimate, given the amount of spending the utilities are planning.

“These customers are paying among the highest retail rates in the nation,” he said.

Driving the increases are “out of control utility spending,” investments in grid hardening and wildfire mitigation, liability costs for wildfires, rooftop solar adoption, “excessive utility shareholder profits and generally the unwillingness of state regulators to impose spending discipline or hold the utilities accountable.”

Freedman argued this has led to customers owing $2 billion in arrearages and a million and a half Californians facing threats of service shutoffs. He urged the lawmakers to find other sources to pay for the clean energy policies and grid reliability objectives.

For several years TURN has been lobbying the Legislature to apply taxpayer funds to reduce the ratepayer burden.

“Putting the entire cost of this transition on ratepayers is simply unsustainable,” said Freedman. “It would frustrate our ability to promote other state policies like transportation and building electrification.”

California races to stop power lines from causing more wildfires—amid outcry over the cost to ratepayers
The decline of ag? Newsom’s diesel ban brings a new level of uncertainty to growers and truckers
Air Board begins to deliver on zero-emission order

With the need to build new transmission facilities to handle the larger load, he urged the lawmakers to take a “creative and ambitious” approach and apply state financing to the issue, lowering customer bills in the process.

“It's just math. You bring down the cost this way,” he said. “The utilities don't like this approach, because it does threaten their profits.”

He called for a bold shift away from the current paradigm and questioned whether it was a good idea for agencies like DWR to spend money on hardware that never gets used.

“If you're going to go buy up all the diesel generators and stick them in a warehouse and hope that you never have to use them, was that the wisest use of state money?” he asked.

He predicted regulators will continue to require natural gas plants to stay online to store energy for difficult times ahead and will cover the costs through taxpayer dollars.

Like Freedman, John Kennedy, a policy advocate for Rural County Representatives of California (RCRC), noted challenges on the distribution side of the energy issue in establishing new connections. A new food processing facility in Fresno County had “major problems” recently in procuring the necessary system upgrades to get the facility online and had to rely on backup diesel generators. For smaller projects like this, it can take four years for the infrastructure upgrades, though one North Coast hospital faced a seven-year delay, he explained.

Kennedy emphasized that these problems arise with normal economic growth and that it will pose considerable frustrations in electrifying truck and bus fleets and decarbonizing industrial processes.

Turning to solutions, Freedman saluted the $7.9 billion the Legislature approved as a five-year budget package to support energy reliability, debt relief and clean energy investments. But he worried about losing that money to an economic downturn.

Last week the Legislative Analyst’s Office (LAO) issued a warning to lawmakers to take drastic measures to reduce spending. State revenues could plummet as much as $50 billion next year, leading to a $25 billion deficit. The chances for the Federal Reserve to “tame inflation without inducing a recession are narrow,” according to an LAO report released last Wednesday. Rather than dipping into reserves right away, the Legislature should reign in any budget money not yet distributed, the analysts suggested.

Freedman, however, feared that if clean energy investments are not honored, “it's going to significantly hamper our progress in achieving a variety of these objectives.” He also called on California to be aggressive in securing its share of funding from the Inflation Reduction Act and direct it to reducing the burden on the state’s taxpayers and ratepayers.

“Unless the state acts quickly, we may lose the opportunity to get some of this money,” he cautioned.