WASHINGTON, Sept. 27, 2017 - University of Illinois experts say lawmakers should consider using the next farm bill to lift restrictions that may discourage farmers from planting cover crops to reduce soil erosion.

The restrictions require farmers to follow good farming practices for insured crops and include specific requirements on when a cover crop must be terminated.

“Given the importance of crop insurance to the farmer, the uncertainties about insurance and cover crops could be a barrier that works against nutrient loss-reduction strategies,” write the analysts, Jonathan Coppess and Gary Schnitkey.

They suggest Congress consider eliminating the termination requirement and clarifying whether prevented-planting claims would be honored when cover crops aren’t terminated because of weather events, the economists said.

Coppess, a former administrator of the Farm Service Agency, tells Agri-Pulse the prevented-planning issue is difficult to clarify. “If the farmer who adopted cover crops is the only one in the area that was prevented from planting, it is likely under that he or she would not be covered,” he said in an email.

To help guide farmers, RMA published a map that shows their cover-crop termination dates. For most of Iowa, Missouri, Arkansas and most states east of the Mississippi River, cover crops can be terminated at or within five days after planting the commercial crop that the farmer wants to insure. Nearly everywhere else, cover crops must be terminated before planting. 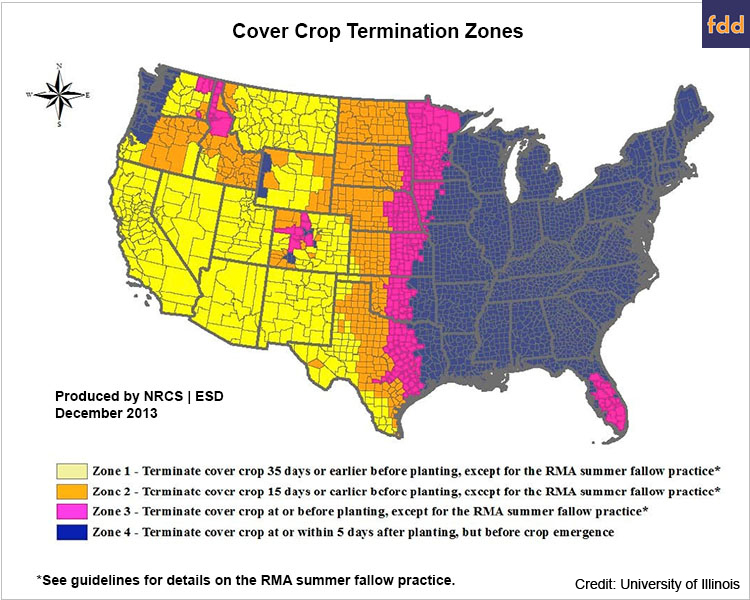 There is concern that the termination requirements can’t keep up with innovations in farming practices “and thus risk stifling innovation over the long run,” wrote Coppess and Schnitkey. “The farm bill could bring clarity for farmers and insurers about the treatment of cover crops including whether they can be considered interplanted absent malfeasance or neglect on the part of the farmer.”

But Brandon Willis, who had to grapple with the cover-crop issue as administrator of the Risk Management Agency from 2013 through 2016, says he doesn’t think the termination requirements are a significant barrier to cover crops.

Groups that believed the termination requirements were too restrictive “provided the most far-fetched example to the media of a farmer who became ineligible for crop insurance due to a cover crop, yet due to privacy reasons RMA wasn't able to respond to the situations,” Willis said.

He went on: “A few groups seemed more interested in making crop insurance look like the bad guy in order to further their agendas than addressing real problems."

That said, Willis believes it’s probably time to reevaluate the termination dates. The intention was to keep them in place for a year or two to see how they worked. “We are now at a position where there can be further evolution, and a discussion on the topic is timely,” he said.