Agriculture in the Golden State was on a path to recovery as 2020 began. According to California Farm Bureau Federation President Jamie Johansson, the industry then bounced from one crisis to the next—as markets shuttered overnight due to the pandemic, social justice activists “took full advantage” of the situation and the governor issued dozens of executive orders. With wildfires, Proposition 15 and budget battles to come, the Northern California farmer said he will be having “a lot of frank discussions coming up” with state policymakers.

Johansson delivered his review of 2020 and outlook for agriculture last Thursday at the fall meeting of the California chapter of the American Society of Farm Managers and Rural Appraisers.

“We were on a little roll,” said Johansson, in describing the first quarter of the year.

With the U.S.-Mexico-Canada Agreement approved and progress on the labor front with the Workforce Modernization Act, agriculture looked to recover from the Trump administration’s trade shutdown. The administration also replaced the “waters of the U.S.” rule with one that significantly reduced federal jurisdiction over streams and wetlands. In California, the Farm Bureau worked with the State Water Resources Control Board to step back on its “waters of the state” rule, according to Johansson.

Then confusion reigned among farmers as Gov. Gavin Newsom responded to the growing COVID-19 crisis with a stay-at-home order.

“We talked with [CDFA Secretary Karen] Ross and administration officials, reminding them we were an essential industry,” said Johansson, explaining how the administration relied on trade groups to interpret the meaning of “essential.”

Californians were suddenly noticing the vital role agriculture plays in the state and across the nation.

“I remember a few members feeling a sense of pride that one of our duties wasn't only to get food to the shelves, but it was to calm consumers down,” said Johansson.

The industry applied lessons learned from protecting workers under the Food Safety Modernization Act to set up voluntary standards that the state would later follow and “claim to be mandatory,” including separating workers in the field and staggering start and break times. The California Farm Bureau sought to use city buses to transport workers to maintain social distancing, though those requests were denied. 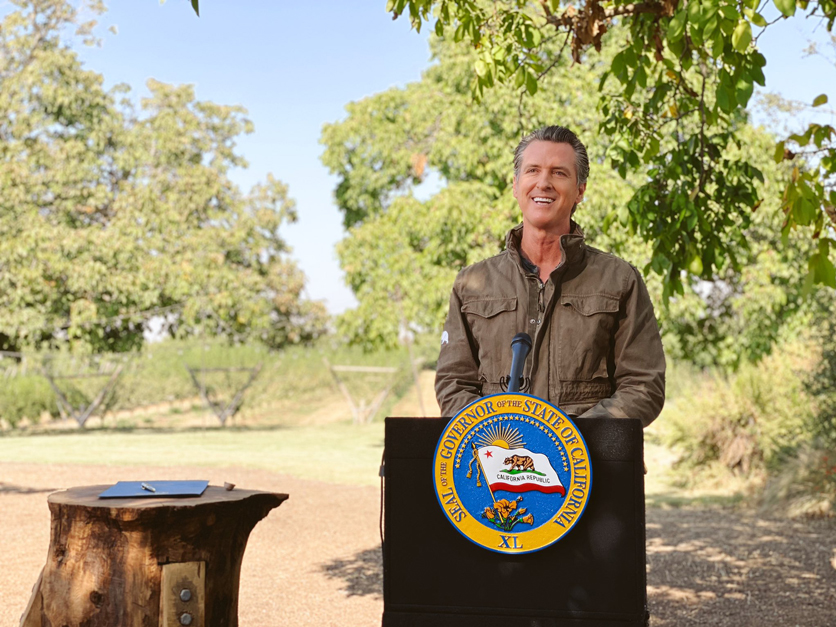 Farm groups reached out to the Newsom administration to see if they could “piggyback” on the governor’s program for housing homeless populations. They proposed housing asymptomatic farmworkers who were exposed to the virus in the 40% of hotel rooms and apartments left unused by the program. About five months into the pandemic, the administration launched its own housing program, inspired by the work of farm groups on the Central Coast.

“Yet we're continuing to be accused that we weren't doing enough,” he said.

With meatpacking plants in the Midwest closing due to outbreaks, the narrative took a different turn.

“The activists on the on the social justice side—[United Farm Workers] and the labor groups—really saw an opportunity to take a shot at agriculture, and they took full advantage of it,” said Johansson.

Farmers, he noticed, wondered if it was too much of a legal risk to continue running and if they could afford to close.

“What we saw during this pandemic was really the precautionary principle,” he said, describing a regulatory approach defined by avoiding all uncertainty and shifting the burden of proof to the industry.

Essential businesses feared gaps in liability protections would expose them to a wave of lawsuits. The California Farm Bureau pushed back on a bill that would have automatically considered all coronavirus exposures among employees to have taken place on the farm. The final measure signed into law by Newsom, Assembly Bill 685, allowed for employers to still rebut the claim. Many labor advocates called for essential industries to cover hazard pay, and Johansson said he will be watching for more legislation on that next year.

“Then [the pandemic] became much more political,” he said. “It really started with all the executive orders that were coming.”

Republican Assemblymember Kevin Kiley of Rocklin tallied up more than 400 laws that were changed by more than 50 executive orders from Newsom.

“But the biggest problem comes when it ends up in the bureaucracy of the regulatory bodies,” said Johansson.

A mandate on electric vehicles will have exorbitant costs for small to mid-sized farms, he argued. A vague order calling for the conservation of 30% of the state’s land and water by 2030 drew further frustration, as the governor, in a meeting with Johansson, said he would leave it up to agriculture to determine how that could be implemented. The Farm Bureau president protested, explaining that agriculture is already protecting open space through the Williamson Act. He worried the principles of conservation were giving way to preservation—“a static concept.”

“I told the governor, ‘In agriculture, conservation is what we do,’” said Johansson. “We utilize renewable resources to create wealth.”

He argued that without managing those resources, they become a liability, suggesting neglected lands increase the fuel load for wildfires.

In managing forests for fires, Johansson added, the state government has “chased off” the timber industry and now “can't afford to manage their own property.” He also shared reports from some farmers that their insurance providers have been dropping fire coverage after major wildfires burned into some vineyards and farms this year.

With the executive orders and the $54 billion deficit in the state budget, Johansson expects Newsom and legislators are about to walk into “a lot of big discussions.” Following the Great Recession of 2008, the state faced a $40 billion deficit, which led to many CDFA and regulatory programs becoming industry funded through fees and permits. This time, the state should slash its spending, argued Johansson, adding that the budget has doubled in just 15 years.

“The budget situation is going to be a crisis for the state of California,” he said. “It's a crisis for all of us, because unfortunately, what the state turns to is more taxes and fees and regulations.”

He worried both the new property tax assessments proposed under Prop. 15 as well as the administration’s conservation goals would hurt farmers. The dairy industry has invested heavily in building digesters, which has led to a 26% reduction in methane emissions but could be taxed under the proposed ballot measure.

“They want to raise taxes across the board,” he said. “And they're coming for the homes as well.”

The dramatic rise in regulatory costs over the last decade, along with skyrocketing water and labor expenses, has been driving industry consolidation and pushing businesses out of California, he argued. Food processors have led the way and commodities are following, with lettuce now being grown in Central Colorado, carrot operations moving to Georgia and Mexico increasingly competitive, he said.

“It's simply becoming too expensive to do business and too unpredictable,” he said.